Home » Josh Duhamel Is Flying. He Sure Didnt Plan On It.

Josh Duhamel is a superhero now. But that was never really his plan.

The 48-year-old has done virtually everything, from action (the Transformers movies), to rom-coms (New Year’s Eve, When In Rome), to coming-of-age (Love, Simon), to TV (he got his start on the soap All My Children before breaking out in NBC’s Las Vegas). But he never saw himself becoming part of the recent boom in superpowered film and television.

“I wasn’t really looking to do it,” he says over Zoom in April, as the sun shines through his kitchen windows. “I never really know what I want to do until I read it, until something really sort of moves me or speaks to me, and I really loved this story. I thought if I was ever going to do a superhero thing, it would have been 15 years ago.”

The story he’s referring to is Jupiter’s Legacy, Netflix’s latest attempt to get in on—you guessed it—the superhero craze. While the streaming giant has tried its hand in the genre before (their version of a Marvel-verse included shows like Daredevil, Luke Cage, and Jessica Jones), they never really got one to take off quite like their flagship smash hit Stranger Things or more recent successes like The Queen’s Gambit. The hope is that Jupiter’s Legacy—based on a comic series by the great Mark Millar (who wrote the comics that inspired the films Kick-Ass and Logan)—could be that hit. 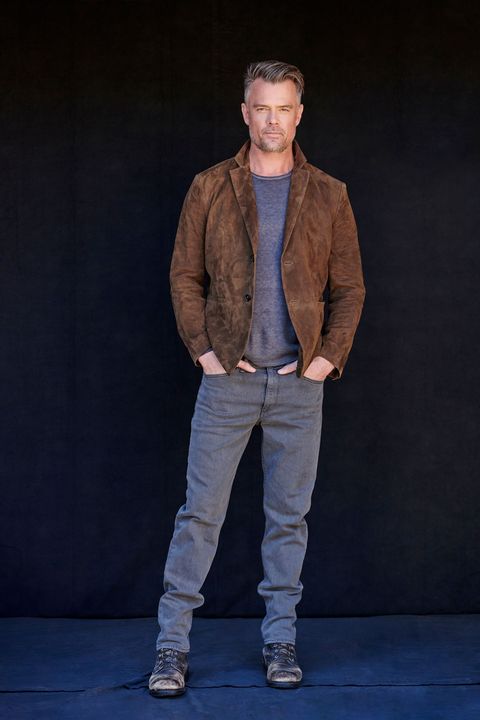 DUHAMEL PLAYS Sheldon Sampson, the slow-aging patriarch of the super-powered family at the show’s center who also goes by the identity of The Utopian. The Utopian is defined not by his powers—of which he basically has all the powers and worldwide admiration of Superman—but the varying degrees of fractured relationships he has with the members of his own family; when he tries to lead a family dinner in the show’s first episode, his daughter (Elena Kampouris) shows up late and under the influence.

The show presents Duhamel’s character—along with others played by costars Leslie Bibb, Ben Daniels, and Matt Lanter—in two distinct eras: their superhero origin stories, coming just after the stock market crash in 1929, and the present, where they show off their 90-years-later aging with some facial makeup and white hair and beard wigs.

That beard, we should add, meant Duhamel had to show up to set every day at 6 A.M. to get it applied to his face, his face lathered in wet glue. Combined with prosthetic eyes, aging makeup, his wig, and his supersuit, he transformed every morning into The Utopian you see in Netflix’s eight episodes. Perhaps this sort of lengthy process was a reason Duhamel hadn’t done similar projects in recent years—but even this was rewarding. “It wasn’t my favorite, the application of it, but I loved the way it made me feel,” he says, adding that putting on that new face and hair helped him feel the character’s history. “The next thing you know, you feel like you’ve been through about 300 battles in your lifetime.”

Duhamel also mentions something else appealing about playing The Utopian: there’s never been a live-action Jupiter’s Legacy adaptation before. “I didn’t have to be compared to somebody else who’d play The Utopian before me, which would have been scary,” he says.

“There just weren’t scenes in Transformers like there are in Jupiter’s Legacy,” he says. “There’s a lot of opportunity as an actor and not just an action guy.”

When thinking of Duhamel in a major, big budget production, it’s hard not to think about his first big movie role (with respect to his film debut in rom-com aughts tentpole How to Win a Date with Tad Hamilton): in Michael Bay’s Transformers. He starred in the director’s 2007 franchise-starter, before reprising that same role in three sequels. Even moreso than Jupiter’s Legacy, Transformers was the project that really showed him, he says, what it’s like to work on a big, big movie.

“Nothing really compares to the Michael Bay production,” he says. “Those things are full on. That was straight up bombs and guns going off. It was chaos every day, but really, really fun to shoot.”

Some of that opportunity comes in flashback scenes, as Sheldon goes through a mental health crisis.

Right around the time of the stock market crash, in the show’s first episode, Duhamel’s character, the pre-superpowered and a bit naive Sheldon, witnesses a particularly traumatic event that sends him spiraling. For a couple episodes, his character deals with the aftermath in a way that worries those around him. And Duhamel took the opportunity to really dive into that character moment when the series called for it.

“It took me a good week or two to sort of come out of that, for the clouds to sort of disappear,” he says. “Because I went to a dark place for a little bit, and it takes a toll on you. But also, what other job can you have where you’re forced to go to these places mentally and you’re not going to get actually put in a psych ward? You get to expel this stuff that you don’t even know is in you. And that was what, for me, is really cathartic.”

And, as Duhamel says, even when filming that part of a story came to a close, it took him a little bit of time to snap out of it in the aftermath. “I was like, “Okay, I might have to go see somebody because I’m still feeling that,’” he says. 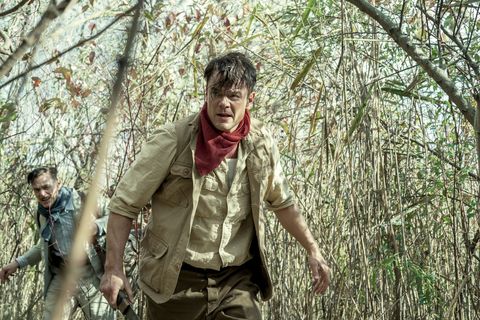 JUPITER’S LEGACY, in a way, feels like two separate movies fitting like two sides of the same coin. While the present-day scenes are certainly in that familiar superhero genre, the flashback scenes feel like an adventure story, closer to the Brendan Fraser version of The Mummy or something set on Skull Island.

But whether the show’s setting found Duhamel flying through the air fighting bad guys, running a steel mill in 1929, or on an adventure spanning the seas and a mysterious island, the show did have one big requirement: get in shape. The cast was split into three groups that would work out regularly in scheduled times throughout the day; Duhamel was grouped with Daniels, Bibb, and Lanter. And while he loved having the show make them work out—”When else am I ever going to be told I have to go to the gym at this time?” he says. “It’s a great way to stay in shape, because you have to.”—he’s also quick to note that, well, not everything we see in those supersuits is entirely real.

“For me, as Josh, it’s easy to get caught up in your work and go out and try to achieve, achieve, achieve,” he says. “But if you’re not there as a present parent, at the end of the day, what’s it all for?”

“Obviously, the muscle suit helps, when you get to put a muscle suit on, and then the costume over the top of that,” he says. “It’s a bit emasculating when you take that muscle suit off and you realize what you actually look like underneath that thing, but I was stronger than I’ve been in a long time shooting this, that’s for sure.”

But in the end, the story of Jupiter’s Legacy is one of duality. And one of a life to come, and a life learned. Most people won’t be able to reflect on their life choices 90 years later. But when you’re a superhero, and you have a superhero wife, and superhero children, those are the choices you grapple with. And Duhamel sees that duality as something that’s incredibly engaging. 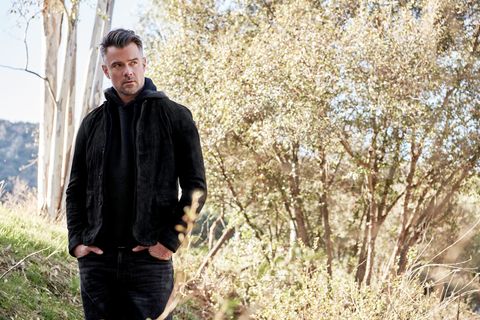 Beneath all the energy beams, muscle suits, and “superhero badassery,” he sees the story. And that story is one of a man so caught up with living life by his code and trying to help the world at large as a superhero, that he wasn’t as present as he could have been in raising his kids, and that caused fractures. And when his kids start diverting from his codes and advice—his daughter is rebellious and abuses substances, while his son wants to follow in his father’s footsteps, but makes a key misstep of his code—the show kicks into a high, almost soapy gear.

Duhamel, father of a 7-year-old son, particularly relates to that part.

“For me, as Josh, it’s easy to get caught up in your work and go out and try to achieve, achieve, achieve,” he says. “But if you’re not there as a present parent, at the end of the day, what’s it all for?”

The superhero genre, in 2021, is always going to be crowded. But where Jupiter’s Legacy is hoping to find itself standing apart is by telling a relatable, human story. These people have superpowers. This guy is probably about 130 years old, has superpowers, and has a beard like he’s Zeus. But his conflict—feeling like maybe he wasn’t there all along for his family—is something that anyone who might get too caught up in their work can relate to, whether they’ve got a muscle suit under their outfit or not.