It seems as if Chrissy Teigen has more skeletons in her closet, as designer Michael Costello has now revealed the model allegedly bullied him to the brink of suicide. The “Project Runway” alum posted a lengthy statement to his Instagram on June 14, writing that “for the past 7 years, I’ve lived with a deep, unhealed trauma.”

Costello claimed that Teigen and her stylist Monica Rose “blacklisted” him from the fashion industry for using a racial slur online, which ended up being “photoshopped.” “I wanted to kill myself and I still am traumatized, depressed and have thoughts of suicide,” he wrote. The 38-year-old explained he received a public comment from Teigen on Instagram, accusing him of “being a racist” after an unverified screenshot allegedly showed him using the N-word.

“She apparently formed her own opinion of me based on a photoshopped comment floating around the internet, which has now been proven to be false by Instagram and since taken down,” Costello alleged. He went on to say that, even after telling Teigen he was “the victim of a vindictive cyber slander” and trying to reason with her, the “Cravings” author persisted and said his “career was over.”

And according to Costello, Teigen “lived up to her words,” as she allegedly “threatened” any brands or companies who sought to work with him.

Michael Costello shared screenshots of his interactions with Chrissy Teigen 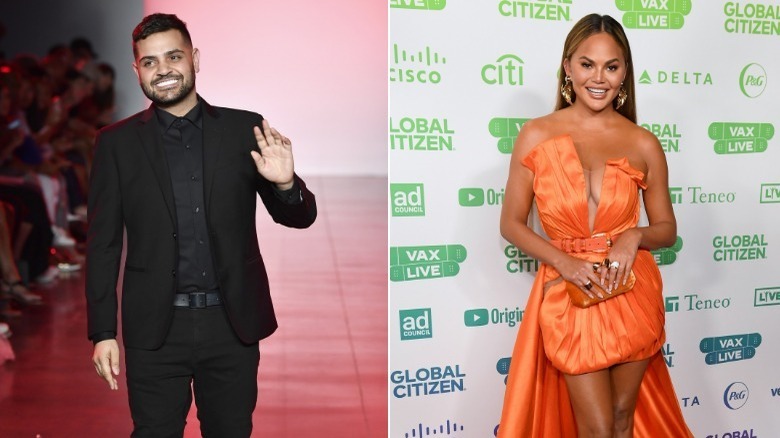 Fashion designer Michael Costello told his 1.3 million followers he “didn’t see the point of living” after Chrissy Teigen allegedly put him out of work for seven years. He claimed on Instagram, “There was no way I can ever escape from being the target of the powerful elites in Hollywood, who actually do have powers to close doors with a single text.”

Costello posted screenshots of the alleged DMs he received from Teigen, in which she says “racist people like you deserve to suffer and die,” even after he confessed to her that he was “suffering.” The last screenshot saw Teigen write, “You might as well be dead. Your career is over, just watch.”

Costello said he “kept silent” for all those years, as he was “living in fear” of Teigen, but having sunk to the “darkest hour” of his life last week, in which he sent suicide letters to family and friends, he’s hoping to “heal” himself. “As a result of what Chrissy Teigen did to me in 2014, I am not okay. I may never be okay, but today, I’m choosing to speak my truth,” he said.

Costello’s claims come less than five hours after Teigen posted a statement apologizing for her “past horrible tweets.” The model has been facing backlash ever since tweets resurfaced last month, in which she “troll[ed]” Courtney Stodden. “These bullies could’ve reached out to me anytime, but they refused. Instead, they would much rather see me suffer and laugh at my demise,” Costello concluded.

If you or anyone you know is having suicidal thoughts, please call the National Suicide Prevention Lifeline​ at​ 1-800-273-TALK (8255)​.