If a place could look like a hangover, Miami Beach would hit the mark. It’s early evening on Monday, March 22nd, and many of the spring breakers who did an indisputable number on Miami Beach’s Entertainment District over the weekend are, apparently, taking a much-needed nap. Police barricades and circling news helicopters contribute to the battlefield aesthetic that has been populating news and social media feeds for the last week, but for the remaining revellers who still meander down Ocean Drive — for the bars, clubs, and cafes open for business, and for the officials on ever-thinning ice with, well, everyone — it still feels like the calm before the storm.

On Ocean Drive between 7th and 8th Street, ground zero for spring break mayhem, a sole CVS breaks the otherwise uniform run of bar, club, hotel, bar — a beacon of hope and Gatorade for parched partiers. An employee of the pharmacy chain, who asked not to be named, takes a long, deep breath when asked how he’s faring. “It’s been the worst ever,” he says finally, as he continues to restock iPhone chargers, chalking up the near riot-like street parties to the cabin fever people have been experiencing under pandemic conditions.

Last year, as Covid hit full swing, spring break didn’t take a break.The added stress of a Covid surge fueled existing tensions between Miami Beach’s notoriously over-reactive police force, a largely black spring break population, and wealthy white residents. When revellers took over, there was a last minute effort by then Miami-Dade Mayor Carlos Gimenez to curb the crowding by shutting down the beaches, but that failed to prevent the usual mess and tumult. Any expectations that lessons would be learned and tactics adjusted this year have failed to materialise. Crowds are bigger and rowdier than ever. And as curfews have shoved partiers onto the streets, those crowds have been met with Miami Beach Police in full riot gear.

In the run up to spring break 2021, which lasts for most of March and early April, Florida Governor and likely 2024 Republican presidential candidate Ron DeSantis touted the State as “an oasis of freedom in a nation that’s suffering, in many parts of the country, under the yoke of oppressive lockdowns.” This, and policies like rolling back the statewide mask mandate (meaning local officials could require mask-wearing, but not enforce fines) encouraged students and their beer dollars to flock to Florida.

Untold thousands descended upon Miami Beach, which at first provided a welcome influx of business for increasingly desperate restaurant, bar, and hotel owners who largely rely on non-locals. As the hordes kept coming, however, businesses and their staff became overwhelmed. After a woman died and over 1,050 arrests were made, officials began to balk, causing many Miami residents to wonder why their government continues a pattern of pitching first and panicking later. “I’m lucky to work and make money,” says Tatiana Moreno, a bartender at Mac’s Club Deuce. “However, them allowing the Wild West to happen here, and not foreseeing that, it’s now extremely difficult to stay open.”

Jessica Francos, vice president of operations at Jesta Hotels & Resorts, was at the helm of one of the most prominent Ocean Drive businesses, the Clevelander, when things took a turn. The hotel, which boasts a large outdoor deck fitted with a bar and DJ booth, sits at the heart of the Entertainment District, affectionately known these days as The High Impact Zone. At first, Francos looked forward to the increase in business. “I welcomed spring breakers,” she says.

Then, on the evening of Saturday, March 13th, she and her staff heard either fireworks or gunshots in the distance. “Then a stampede of 300 or 400 people ran inside our establishment, into our lobby, into our kitchens, and back-of-house areas where staff members were,” says Francos. “And none of them had masks on.”

Francos was reluctant to close for an extended period of time, since her employees were depending on their paychecks during this much-needed “high season.” Instead, she hired extra security and off-duty police officers, creating a velvet-roped perimeter that was “like Fort Knox,” she says, and opened for business on Thursday, March 18th, with a new strategy of bag checks upon entry to the hotel, and an earlier close time of 10 p.m. But by 9 p.m. the bar had been slammed by another stampede. “I rushed downstairs and you could see the furniture knocked down, and team members were scared.” Francos restored order to the bar, but just 30 minutes later, as she returned to her office, yet another stampede of spring breakers caused havoc in the lobby. 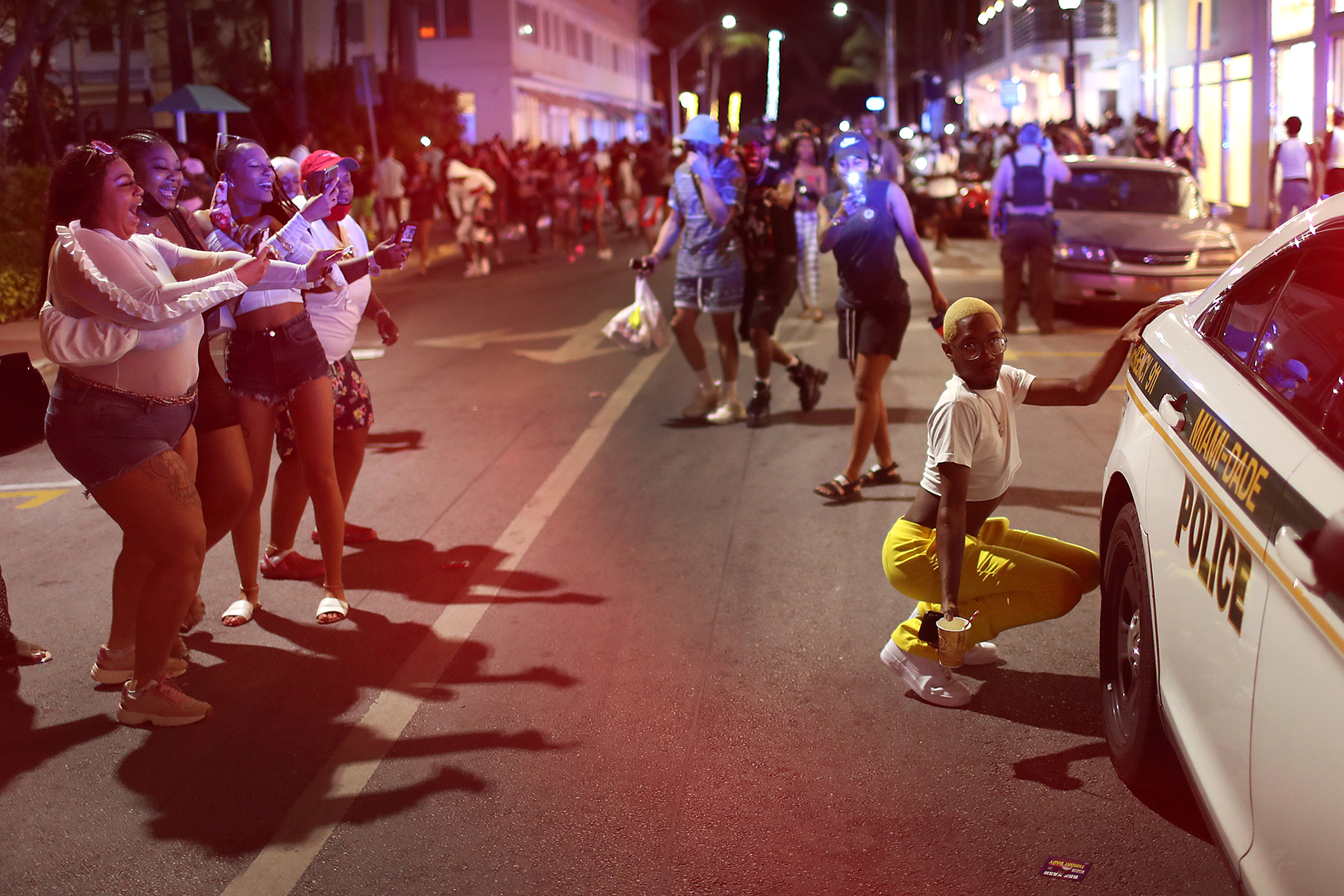 Revelers pose for pictures as an 8pm curfew goes into effect on March 21, 2021 in Miami Beach, Florida.

Later that evening, Miami Beach Interim City Manager Raul J. Aguila’s declared a State of Emergency throughout the city, closing the strip from 8 p.m. to 6 a.m. from Thursday through Sunday, effective until April 12th. Francos didn’t want to take any more risks. After a sleepless night, she made the difficult call to her superiors to recommend a temporary closure until the dust settled.

It’s been a busy week for City of Miami Beach head of communications Melissa Berthier. She maintains that there was no way to foresee how out of hand events would get. The Miami Beach office “had planned for spring break way in advance,” she says, pointing to a two-page February 18th press release that outlined such meme-ified rules as “the limitation of live or amplified music.” However, she notes, “when there’s thousands of people on the street and you can’t see the asphalt, we know they aren’t social distancing.” Berthier remains on edge. It’s hard to tell whether recent measures will be enough to curb out-of-control antics. The real test is still to come as new droves of visitors are expected to descend upon the city at the weekend.

The disparity between promises of a boozy utopia and the reality of a choppy clampdown has confused revellers. For Hubert Tyndall from New Jersey, who is sipping on Titos and Brisk Lemonade outside the now-closed Clevelander on a Monday afternoon, this is his third year celebrating spring break on South Beach. He and his friends say they are disappointed by the 8 p.m. curfew as it has “really messed up the vibe,” but he insists that the curfew won’t stop them from having a good time, as they won’t be respecting it. “Covid doesn’t start at 8pm,” he says, reflecting a common irritation among the revellers who seem generally unperturbed by the risk of either infection or arrest.

Like so many other students who are moving into their second or third week of partying, an online school schedule has helped rather than hindered Tyndall’s spring break efforts. The conversation ends a little abruptly, as he remembers he has class in five minutes, and begins to get his headphones out of his backpack.

Since October 2020, Miami Beach has been under a 12 a.m. curfew. This means that many of the larger bars and clubs with the infrastructure to cope with crowds of rowdy guests have had to close at midnight — just when they normally absorb the outflow from the smaller bars and restaurants. Although curfews are supposed to quell late-night crowding, with no venues to quench partiers’ thirst for a good time, the remaining option is to take to the streets.

“We gave them nothing to do,” says Franco. “Everyone knew spring break was coming. I know that it’s hard for a city or a state to say they are going to program an event in a Covid scenario, but if they had programmed certain things around the city, spring breakers would have had something to do and somewhere to go.” The Clevelander re-opened on Wednesday March 24th, albeit with new hours and an updated business model, pivoting to a brunch menu and open only until 9 p.m. and 7 p.m. on weekends.

Thomas Donall, a resident of South Beach and owner and operator of the iconic Ocean Drive gay bar and drag venue The Palace, says the period has always been “challenging.” But this year, after being “ping-ponged” by inconsistent policies and restrictions, the abundance of spring breakers has been tougher to shoulder than most years. “It’s spring break time and we’re one of the only cities open,” he says. “This year is so much worse because everyone is also travelling here because they have their stimulus checks and unemployment.” He also notes that his staff are accustomed to keeping guests socially distant and seated in a defined outdoor area. Had they been allowed to stay open past 12 a.m., this could have reduced the mayhem on the street, and perhaps curbed superspreader antics.

It’s Tuesday evening on March 23rd, and bluetooth speakers compete with each other as Miami Beach PD squad cars line up on the grassy mound that separates Ocean Drive from the white sands of South Beach. The cops have congregated in a semicircle, arms crossed and faces completely covered. Myanna Gates, a recent college graduate from Minnesota, grins as she explains that she has just completed her third week here. “I love the action,” she says of the scenes that have been covered on the news in the past week. “The police,” she points vaguely, “they aren’t stopping us, they can’t stop us. If they want to put their sirens on, we’ll just move somewhere else.”