The series challenges contestants to meet and fall in love while talking in separate rooms (called "pods"), with no idea what the other person looks like. Couples that get engaged then leave the experiment and spend the next few weeks together, before getting married. The experiment takes a total of 38 days from the very first dates to the wedding days.

Six engaged couples were featured on the first season of "Love Is Blind," but not all of them tied the knot. Here's where every couple from the show ended up by the end of the first season.

Carlton Morton and Diamond Jack were the first "Love Is Blind" couple to break up. 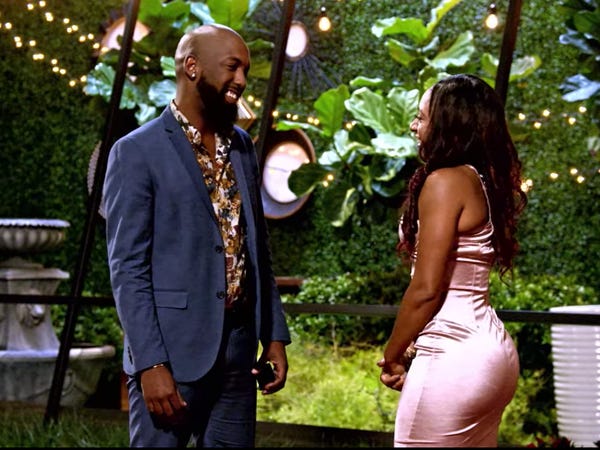 While the pair hit it off and were the second "Love Is Blind" couple to get engaged, Morton was hesitant to tell Jack that he was bisexual for fear of being judged.

When he came out to his fiancée in Mexico, she was hurt that he hadn't told her he was bisexual in the pods, which Morton took as rejection.

The day after his revelation, the couple had another conversation about the topic that quickly devolved into an explosive fight (largely on Morton's part).

"F— a ring!" he shouted as he threw his engagement ring into a nearby pool. "This is why I don't f— with b—-es like you."

Jack responded by throwing a drink in his face and storming away, ending their time on the show together. However, they will both be part of Netflix's reunion special that will be available to stream on Thursday, March 5.

Damian Powers refused to marry Giannina Gibelli, and accused her of lacking commitment during their wedding ceremony. 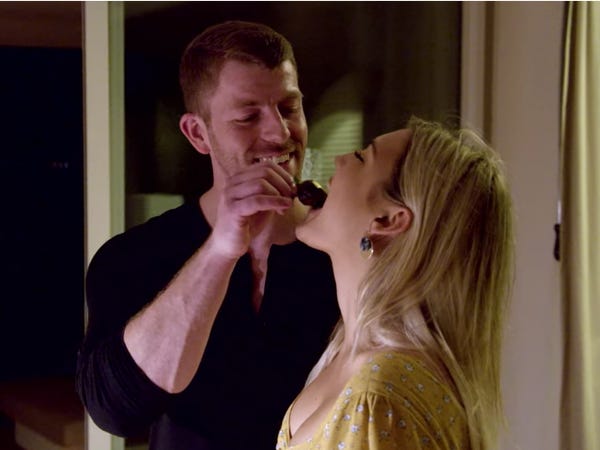 Powers and Gibelli's wedding was the first and arguably most intense of the "Love Is Blind" nuptials.

When asked if he would take Gibelli to be his wife, Powers responded, "I do not."

He went on to berate Gibelli for her apparent commitment issues in front of all their wedding guests, adding, "I can't handle the ups and downs of you loving me one day, and saying you want to be friends the next. It would be selfish of me to marry you today, knowing that as much as you tell me you're ready, I see that you're not."

Gibelli ran out of the venue, away from the show's camera crew.

She eventually came back to confront Damian, but he refused to apologize. Before leaving again, Gibelli ripped a piece of her dress and handed it to him (referencing when he put a bow around his wrist during his marriage proposal, calling himself her "gift").

"You can take your bow back," she said.

Matt Barnett and Amber Pike got married in spite of their arguments about debt and Barnett's cold feet. 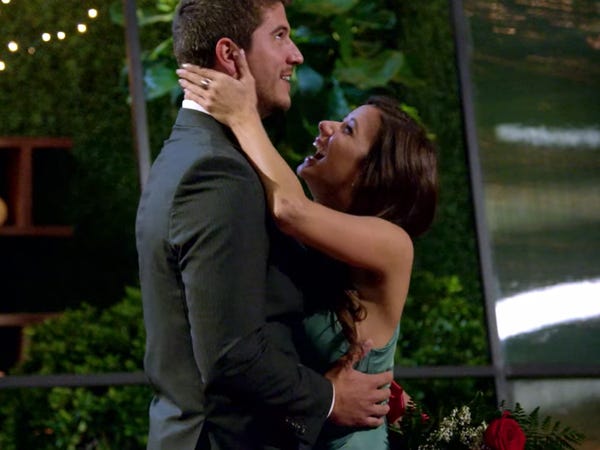 After connecting with several women in the pods, Barnett ultimately proposed to Pike.

The pair had evident chemistry, but later clashed when Pike waited to reveal that she had student and makeup credit card debts until their engagement was well underway.

There was also the issue of fellow contestant Jessica Batten still appearing interested in Barnett — she went so far as to drunkenly reassure Pike that "I won't go after your dude" at the women's joint bachelorette party in episode nine.

Pike regularly pointed out that Barnett frustrated her, even noting in her wedding vows that, "Never have I ever in my life met a man that irks my nerves like you do."

They ultimately got married in spite of it all.

"I can't imagine my life without you," Barnett said at the end of their wedding ceremony, before Pike added, "Good, because you are stuck."

Kelly Chase ultimately turned down Kenny Barnes during their wedding, because she was not "100% sure" that she was in love with him. 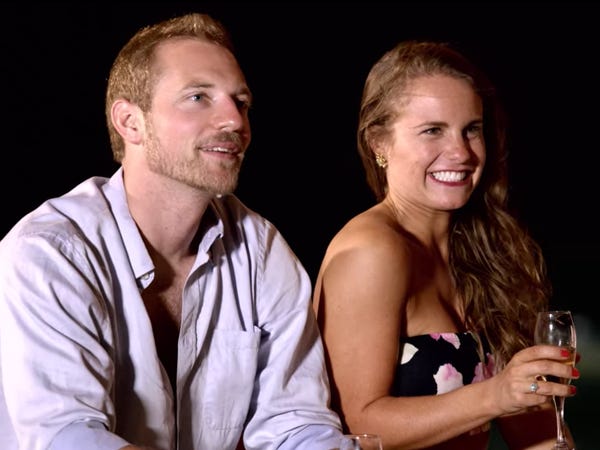 The couple had the smoothest "Love Is Blind" engagement by far, with few relationship struggles — apart from Chase occasionally having to leave for business trips, and their hesitancy to have sex (she was afraid of not having an orgasm).

Still, Chase's decision to not go through with the marriage was surprising given how drama-free their lives seemed compared to some of the other couples.

"I absolutely adore you, and love you," she told Barnes at the altar. "I can't marry you, and I hope that you can appreciate that, and respect that decision of mine."

"You take something that is so complex, and it's authentic, and it's real, but today is not our day," Barnes explained to the gathered wedding guests after Chase walked out. 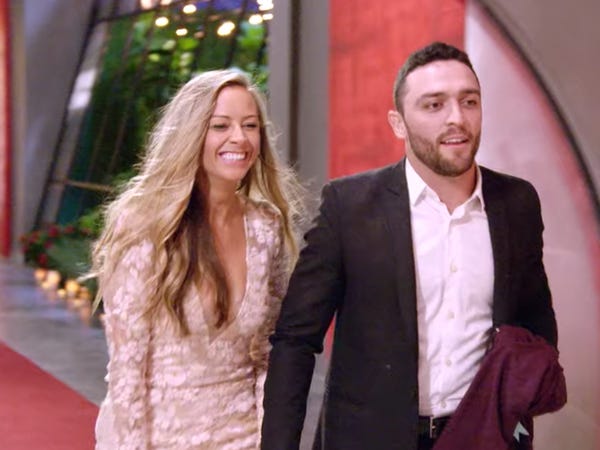 Cuevas and Batten's relationship was contentious throughout the season.

Batten seemed to connect more with Barnett in the show's early episodes, before breaking things off with him after he couldn't commit to his previous declaration that "I would marry you tomorrow."

Although she soon got engaged to 24-year old Cuevas (who is 10 years her junior), Batten's obsession over their age gap and seemingly lingering feelings for Barnett made her question their compatibility.

Her doubts ultimately won out, and she refused to go through with the marriage.

Unlike the other nine remaining contestants, none of Batten's family members were by her side on her wedding day. She had a few bridesmaids (one of whom whispered, "So embarrassing for her," after Batten turned Cuevas down), but ultimately left the experiment alone.

"I connected with someone so deep, I could have never imagined," she said. "But I couldn't translate that from pod to real life. For some people, love might be blind. But for me, it's definitely not." 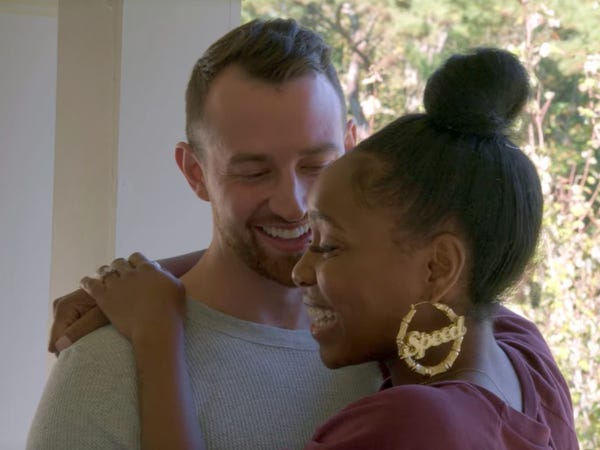 Hamilton and Speed were the first couple to get engaged on "Love Is Blind," with Hamilton proposing only five days after they met each other. They quickly won the Internet's collective hearts, and even Shonda Rhimes tweeted about her love of the pair.

Throughout the show, they were honest about potential obstacles in their relationship — namely, that this was Speed's first interracial relationship, and that her father had wanted her to marry a black man.

But things worked out, and Hamilton and Speed were the second of only two "Love Is Blind" couples to get married.

"We are [still together,] happily married, with a little fur-baby puppy," Speed told The New York Post.