The convicted producer entered the courtroom in a wheelchair 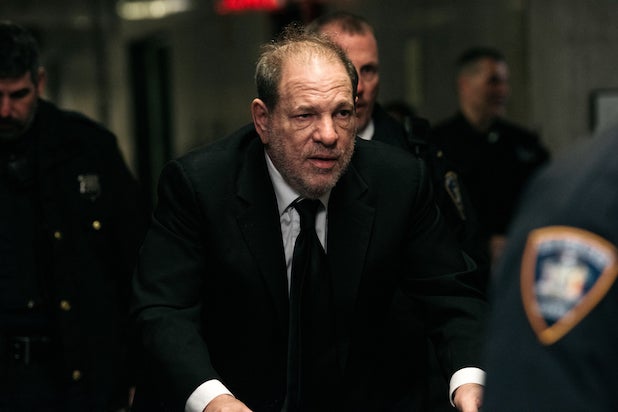 Harvey Weinstein entered his sentencing hearing in a wheelchair Wednesday, six days after leaving Bellevue Hospital, where he underwent a heart procedure after being remanded into custody in February. The convicted movie mogul — clad in a suit and tie — was quiet and reserved during the opening statements.

A New York jury found Weinstein guilty of third-degree rape and a first-degree criminal sexual act in February, ending a months-long criminal trial in Manhattan that focused on the testimonies of six women who accused him of sexual assault. Wednesday’s sentencing reflected those convictions while a separate criminal trial is still expected to take place in Los Angeles for different accusations.

The disgraced Hollywood mogul was immediately taken into custody after the verdict was read Feb. 24 and spent part of his time in custody at a New York hospital. He was moved March 5 to the North Infirmary Command, the medical facility at Rikers Island, following a 10-day stay at Bellevue Hospital, where he underwent a heart procedure, Weinstein’s spokesperson confirmed to TheWrap.

An appeal is still expected.

The jury found Weinstein guilty of third-degree rape of Jessica Mann and a criminal sexual act of Miriam Haley (née Mimi Haleyi). However, the panel found him not guilty of two of the most serious charges — predatory sexual assault against Haley, Mann and “Sopranos” actress Annabella Sciorra — and the first-degree rape of Mann.

Haley and Mann were also present at the hearing Wednesday to read victims’ impact statements.

(Editors note: no cameras were allowed in the courtroom, so the above photo is from file.)