Home » Celebrities » Disneyland's Avengers Campus will have 3 places to eat, from an 'Ant-Man'-themed restaurant to a 'Guardians of the Galaxy' food cart

Terran treats is another cart inspired by the park's "Guardians of the Galaxy" ride that will sell two different dessert treats. 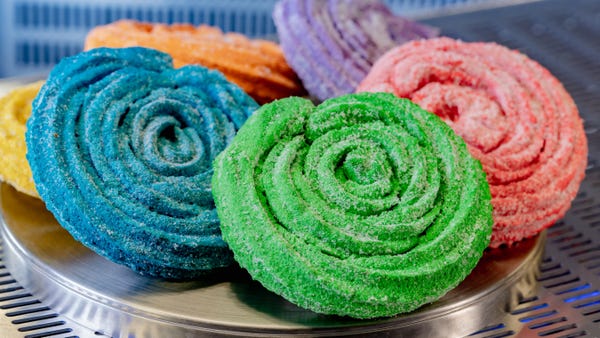 If you're familiar with California Adventure, Terran Treats will be located right next to Guardians of the Galaxy — Mission: Breakout attraction and has a humorous backstory connected to Avengers campus.

Terran Treats is centered around the "Guardians of the Galaxy" character Taneleer Tivan, the Collector. As his name suggests, he likes to collect rare and unusual things. A bunch of them are on display on the "GotG" California Adventure ride, but he's always looking to add to that collection. That's where the park guests come into play.

Terrans is another word for humans. So Tivan is essentially running a "human treats" cart to try and add park guests to his growing collection inside the Guardians' attraction.

"[Tivan] has his Terran Treats cart to lead us towards his fortress," said Avengers Campus story development lead, Jillian Pagan, of how the cart is tied into the "Guardians" attraction.

The cart's food options are an extension of Tivan's character theme.

"They have this crazy, alien-looking food that you think is going to taste like one thing and tastes like something totally different," said Pagan, who clarified the food isn't creepy like Tivan.

One of the items is the sweet spiral ration, which is essentially a churro. Six different colors were shown off to press — red, blue, purple, orange, yellow, and red. If they remind you of the Infinity power stones from the Marvel movies, that's the idea. Each color donates a different flavor churro.

The cart will also have a crispy cream puff called the Cosmic Cream Orb. 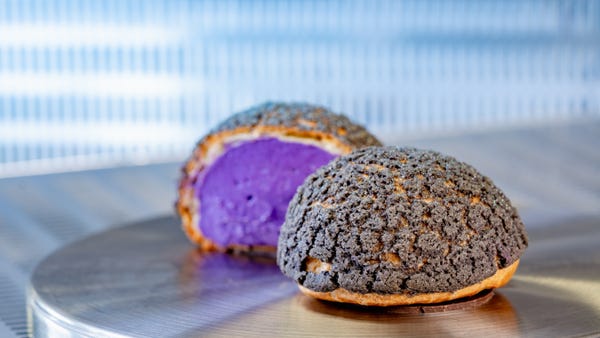 The cream puff has a whipped raspberry cheesecake mousse and is meant to look like the purple power Infinity stone seen in "Guardians of the Galaxy."

Shawarma Palace brings a moment from the end of 2012's "The Avengers" to life. 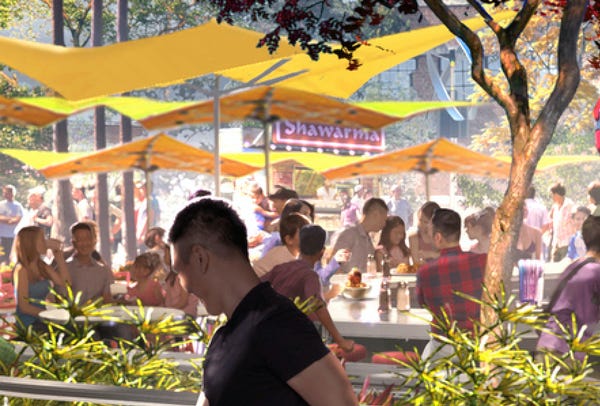 "At the end of the first 'Avengers,' the battle-weary Avengers went to the local shawarma joint and tried it," said Pagan.

"In our fiction, they loved that shawarma so much, it became a tradition for them," Pagan continued. "Naturally, when they crafted their Avengers Campus, they invited their friends from New York to open a second cart here so they and their fellow recruits could get shawarma whenever they want."

The cart will have two shawarma options. The first is a chicken shawarma wrap called New York's Tastiest. The second, the Impossible Victory Falafel, is a plant-based option with Impossible falafels and a wrap made from crusted cauliflower.

You can read more on the Shawarma Palace cart here.

The main food location in Avengers Campus will be the Pym Test Kitchen.

"Superheroes don't normally open restaurants, but what they would do, is use their technology to help the world," said Pagan of the story behind the "Ant-Man and the Wasp"-inspired eatery.

"In our story, they are using their shrinking and growing technology to create new innovations in food science," Pagan added.

The Pym Test Kitchen will play with combinations of large and small-sized food, ranging from chicken sandwiches to pasta dishes with large and small meatballs.

The inside of the Pym Test Kitchen shows food going through a quantum tunnel. 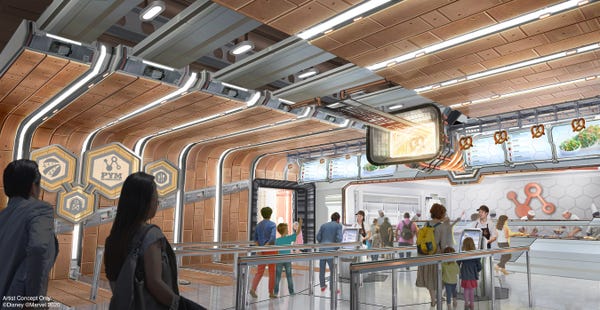 "Of course, you can feed much more people if you can run a normal-sized pretzel through this quantum tunnel machine, hit it with some Pym Particles, and make it grow to a giant size," said Pagan. "Our food and beverage team has done an amazing job extending that story-telling to the food. So you will be able to buy a giant pretzel."

Each food item at the test kitchen is labeled as an experiment number. One of the main items you can order is the "Not So Little Chicken Sandwich." 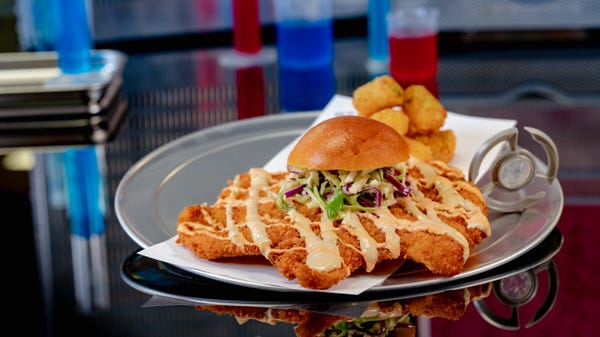 It comes with an overly large piece of fried chicken breast on a regular-sized bun. Some members of the press didn't seem too happy about that since it made it tougher to pick up the sandwich. You could easily chop up the chicken with a fork and knife, but some didn't seem to see the humor in the sandwich to the "Ant-Man" story-telling.

The sandwich is topped with teriyaki and red chili sauces, pickled cabbage slaw, and crispy potato tots. A children's version of this is called the Subatomic chicken sandwich (experiment No. SE91).

Instead of the chicken sandwich, I got to try the test kitchen's version of caesar salad with a colossal crouton (experiment No. EE92). It felt like a stretch to call it a caesar salad, though.

I wasn't too impressed with it and definitely would not pay Disney prices for, what seemed like, a giant piece of romaine lettuce adorned with caesar dressing, kalamata olives, pickled onions, and parmesan crisp. This would not fill me up. Disneyland Resorts didn't provide a photo of that menu item.

I did get to try the Impossible Spoonful, which came with large and small pasta and a small and large plant-based meatball and cheese. 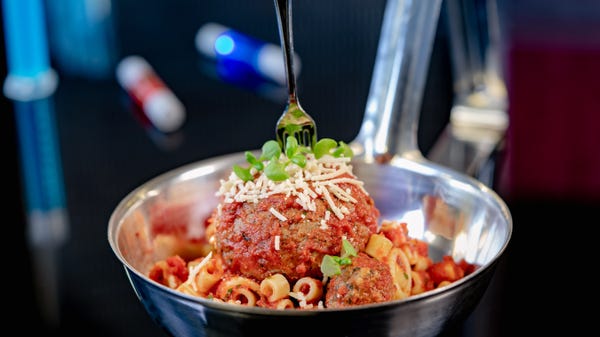 I enjoyed this dish for the playful aspect of how it looked when served. Regular-sized rigatoni was mixed in with smaller ditalini pasta. The meatballs are made using Impossible meat.

For the press event, a tiny fork came with my giant meatball, which I personally got a kick out of. We were told tiny silverware will not be available at the test kitchen. Upon hearing that, I stowed my tiny fork to bring home as a souvenir.

One of the other main dishes here is a family-sized Pym-ini. It can also be ordered in individual servings called the Teeny Pym-ini. 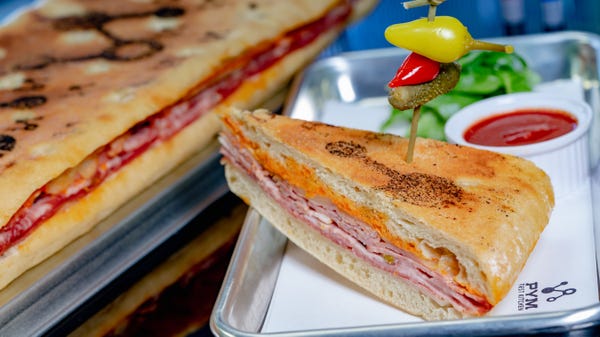 The PB³ Superb Sandwich is an adult peanut butter and jelly sandwich with bacon. 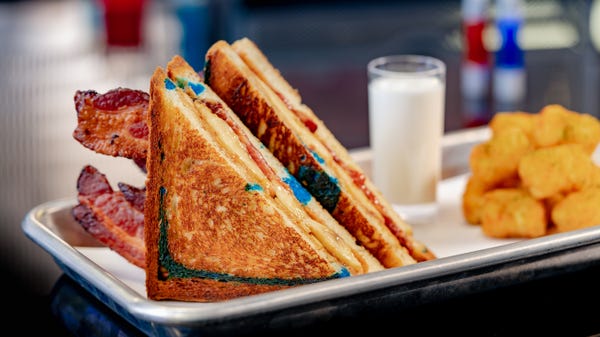 It comes with peanut butter, banana, smoked bacon, and strawberry jelly. It's served with a shot of a banana smoothie and crispy potato tots.

That blue swirl on the bread? That's supposed to resemble blue PYM particles that have hit the bread and enlarged it slightly.

Here are the rest of the menu items guests can choose from. 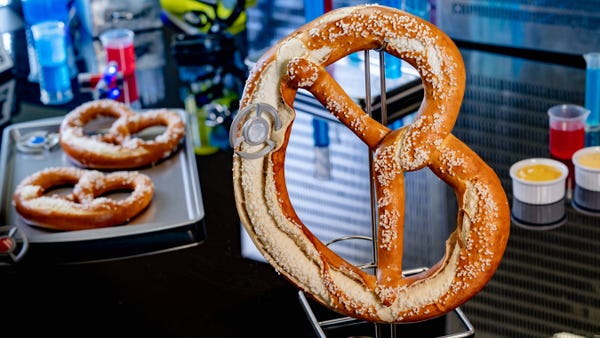 Guests will be able to purchase Pingo Doce soda, a nod to Bruce Banner's time in Rio de Janeiro when he worked at the soda company's bottling plant. 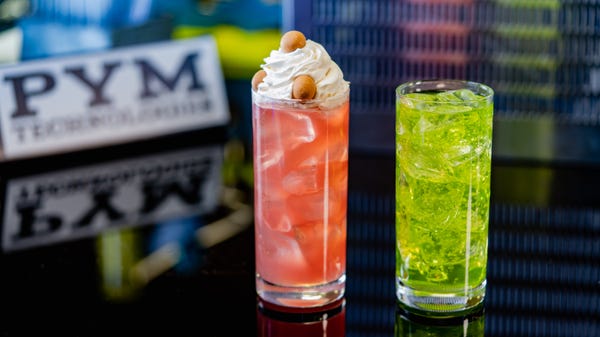 "As you are moving through the space, we are bringing that fun and humor and whimsy to the space itself," said Pagan.

Inside the kitchen, you'll also be able to see giant soda cans in the ceiling along with giant ketchup and mustard bottles. Pingo Dolce soda (above on the right) and Proton PB&J Punch (above left) are both non-alcoholic beverages.

The Proton and PB&J Punch is made with Odwalla lemonade with strawberry and peanut butter flavors. It comes topped with housemade infused peanut butter whipped cream and is covered with tiny peanut butter-covered pretzel bites.

We tried and enjoyed both beverages. The Pingo Dolce reminded us of a Mountain Dew/Sprite beverage (it's a Coca-Cola product). As for the Proton and PB&J, the peanut butter flavor wasn't overwhelming at all. It tasted like a refreshing lemonade. We tried the beverage without the whipped cream.

If you want to get real fancy, the Test Kitchen will be selling glowing Pym particle discs and particle capsules for adults and kids to drop in their drinks to light them up.

For the big Marvel fans, Disneyland will also be selling a large novelty cup that resembles an enlarged Pingo Doce soda can inside Avengers Campus.

If you're an adult, you may want to check out the Pym Tasting Lab where there will be several alcoholic beverage offerings. 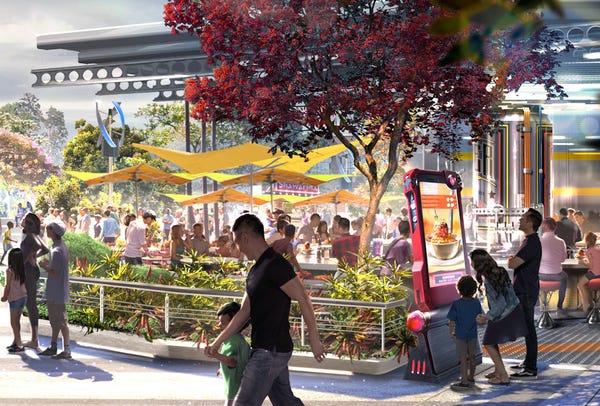 "There is also, at the Pym Test Kitchen, our Pym Tasting Lab, which is our outdoor seating area," said Pagan of the area which is marked by an oversized beer can. "We don't just want to experiment on food, we also have to, in the name of science, make sure that Pym particles can work on beer [and] cocktails."

Eight different beers will be on tap, including a domestic beer, a hazy IPA, a blood orange hefeweizen, a wheat ale, and an amber lager. Wine will also be available, including a cabernet and a chardonnay.

For fans of Doctor Strange and Thor's encounter in "Thor: Ragnarok," they'll get a kick out of beers being poured from a reverse draft system where the glass fills from the bottom up — Strange refilled Thor's large glass with beer in the same way. Four of the eight beers will be available to order this way.

"We're excited to be able to put a reverse tap system in," said director of food and beverage experience integration for Disneyland Resort, Michele Gendreau. "That magic will be able to be seen from our guests at the counter when they come up to the Pym Tasting Lab."

I was able to try one of the beer cocktails called The Regulator. 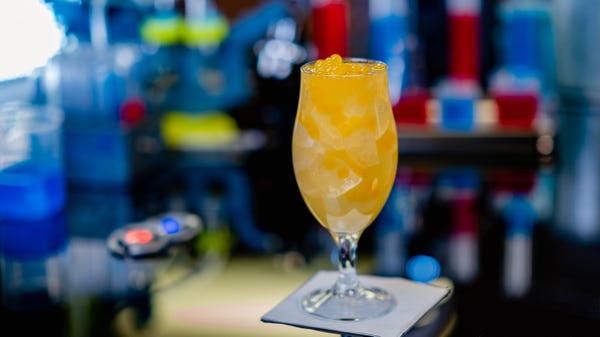 If you're a fan of tequila and mango, then you're probably going to like this.

There are four cocktail choices to choose from, including the Molecular Meltdown, which was described as an adult root beer float. 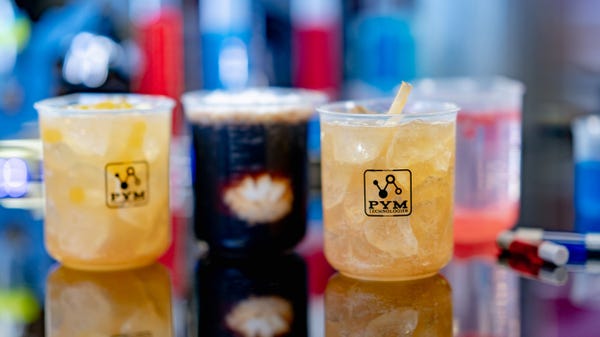 Each drink will be served in a Pym Technologies beaker seen above. Here are the drinks you see above from left to right:

X-Periment has the same ingredients as the Regulator without the beer.
It's made with Patron silver tequila, lime juice, habanero and mango syrup. It's garnished with mango-flavored popping pearls.

In addition to beverages, a snack mix will be available at the testing lab called Snack Molecules. 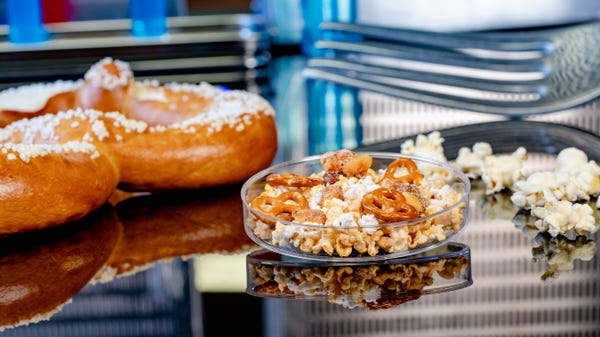 The dish consists of popped sorghum with mini pretzels and honey roasted peanuts.