Shockingly tasteless, a risible script… and Branagh’s Boris Johnson is an abject disaster: CHRISTOPHER STEVENS is no fan of new TV drama This England

Even theatre titans can have the occasional basic lapse in acting technique. Sir Kenneth Branagh, the greatest Hamlet of his generation, Baftas, Oscars blah-blah etc, has forgotten to remove the coat hanger from his Boris Johnson costume.

He plays the Prime Minister in a jelly-mould fat suit, with his arms thrust out behind him like a duck preparing for takeoff.

As he waddles around Downing Street in This England (Sky Atlantic), his shoulders are rigid, his head is thrust forward. No one has made walking look so awkward since Lurch the butler in The Addams Family.

His ridiculous posture fails to capture any of the bumbling charisma or overgrown schoolboy charm of the real Boris.

It’s a criticism that extends to the whole of this six-part docudrama, which describes itself as ‘a fiction based on real events’. 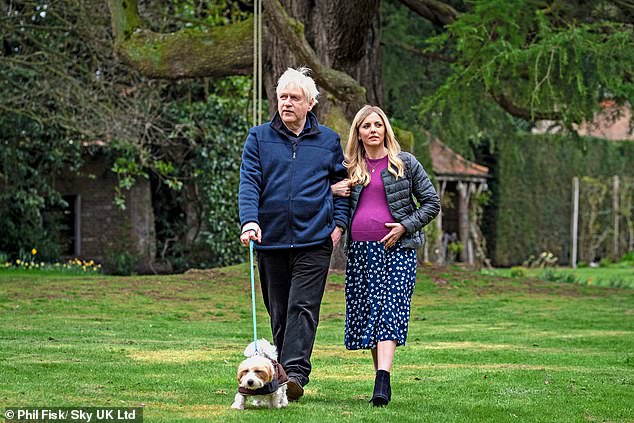 If this is an attempt to apply the dramatic imagination of The Crown to life in Westminster, it’s an abject disaster.

And if it’s a serious effort to chart the catastrophe of Covid and lockdown on British life, it’s even less successful.

Ricocheting between snapshots of hospitals and research labs, Whitehall backrooms and newspaper offices, This England is a whirl of underwritten scenes held together with tickertape captions that can barely keep up with the changing personnel. These fragments, often lasting just one or two lines of dialogue, are interspersed with shockingly tasteless portraits of the PM’s sex life.

After a blizzard of clips from news reels, the drama begins with his arrival in Downing Street. Legs stiff and elbows back as if he’s been lowered into his suit by a crane, Branagh-as-Boris wobbles through the door of No10.

We hear him, off camera, with future wife Carrie (Ophelia Lovibond). He’s doing his Winston Churchill impression, chuntering ‘Power is an aphrodisiac’, and she’s giggling like a teenager.

Six months later, she’s pregnant and fuming at having to hide from the cameras, kept from public view ‘like the mad woman in the attic’.

When he cancels a night out, she takes her revenge by threatening to withhold sex ‘because you are too weak to tell your children about our baby’ – and slips into an off-the-shoulder party dress so that ‘you can see what you are missing’. 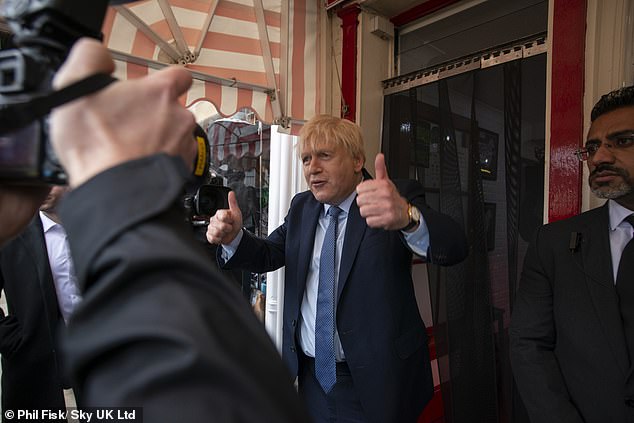 Sir Kenneth Branagh plays the Prime Minister (pictured) in a jelly-mould fat suit, with his arms thrust out behind him like a duck preparing for takeoff

Boris’s non-existent relationship with his children is a constant theme. He leaves voicemails for them at Christmas, reciting their names and the same message for each, and even introducing himself in case they don’t remember who he is.

We appear to glimpse them in one momentary scene – a teenage boy with a blond moptop, watching a speech by his dad on a phone screen until a sister dashes the device out of his hands.

And there are snatches of conversations with divorce lawyers as Boris bickers with hopeless resignation over the alimony arrangements with his ex-wife.

Some of the writing is bad beyond embarrassment. As the news from Wuhan grows worse, Carrie and Boris curl up to watch Kate Winslet in the virus disaster movie Contagion.

The PM complains he’d rather be watching Carry On Up The Khyber. He draws out the title suggestively, and Ms Symonds gives a flirtatious shiver. Encouraged, Boris suggests, ‘Carrie on Prime Minister?’

Are we meant to believe this is a portrait of their home life?

Equally farcical is a scene at the ministerial country retreat, Chevening, where Boris sets up an easel and mopes about, pretending to be the reincarnation of Churchill and complaining about the ‘black dog’ of depression.

He’s depicted as a caricature of a human being, with a Classical misquote for every occasion, occasionally rousing himself to write a page or two of his latest book, while leaving chief aide Dominic Cummings to run the country.

Cadaverous and poisonous, Cummings (Simon Paisley Day) is a bullying schoolmaster let loose among the sixth formers – special advisors or ‘Spads’, most of whom look like they’re on work experience. He’s a monomaniac with tunnel vision, a weirdo too inflexible to deal with the shifting currents of politics.

Anything he doesn’t understand, he ignores – including the unprecedented floods of winter 2020 and the onset of the pandemic.

Cummings’s sole focus is on a power grab, ensuring all Cabinet ministers and their advisers answer to No10 – and that Boris leaves all the decisions to him. 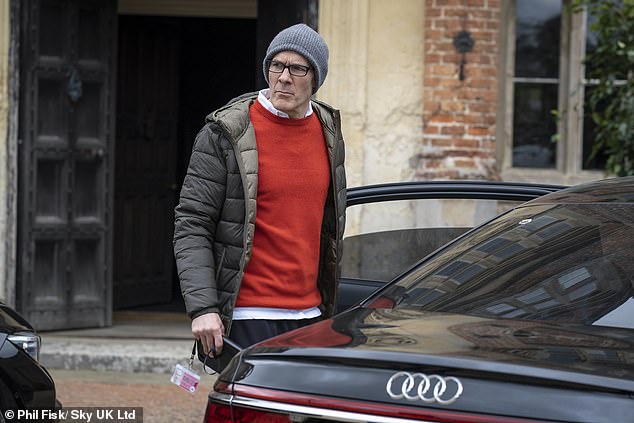 In case we don’t get the message, the edit makes constant cuts with an elephantine lack of subtlety. Here’s Cummings chanting, ‘Get Brexit Done’, and there are Boris and Carrie, transferring from a private jet to a speedboat in Mustique – before another cut, to a rack of dead bats in Wuhan’s wet market.

That’s followed by footage of a Chinese ambulance, and Carrie throwing up in a toilet bowl while a Chinese optometrist fights for breath on a respirator.

When chief medical officer Chris Whitty and his fellow scientists track the movements of a ‘super-spreader’ patient who travelled from Singapore to London and then a Swiss resort, all while suffering from Covid, we actually see the poor man coughing as he skis. No wonder the blasted disease was transmitted so fast.

Matt Hancock (Andrew Buchan) listens to updates with his mouth slightly open, though it’s hard to tell whether he’s in shock or just always breathes like that. His only response, as government scientists grasp how serious the Covid epidemic will be for Britain’s hospitals, is: ‘Why is it always China?

Carrie is portrayed as a harridan, snapping orders at Boris. When a scandal breaks about a former girlfriend of Boris’s, Jennifer Arcuri, she berates him over the phone: ‘Do not even think about trying to talk to this woman.’

And when he’s musing about school, she issues an edict in front of her mother and his: ‘We are not sending ours away, just so you know.’

No one emerges with a shred of dignity, except perhaps former newspaper editor Sir Max Hastings, who is played in a cameo by Charles Dance.

He says nothing memorable, but hey, what chap would complain about that casting?

Perhaps, when he first heard about the show, Boris was flattered by the notion of seeing Branagh play him. He wasn’t reckoning on that fat suit, or the prosthetics that look like an omelette has melted over his face.

The last time we saw fake fat that ugly, David Walliams was blacked up and wearing only a towel as Desiree DeVere, bickering with Matt Lucas’s equally grotesque Bubbles DeVere. This England is more like Little Britain.