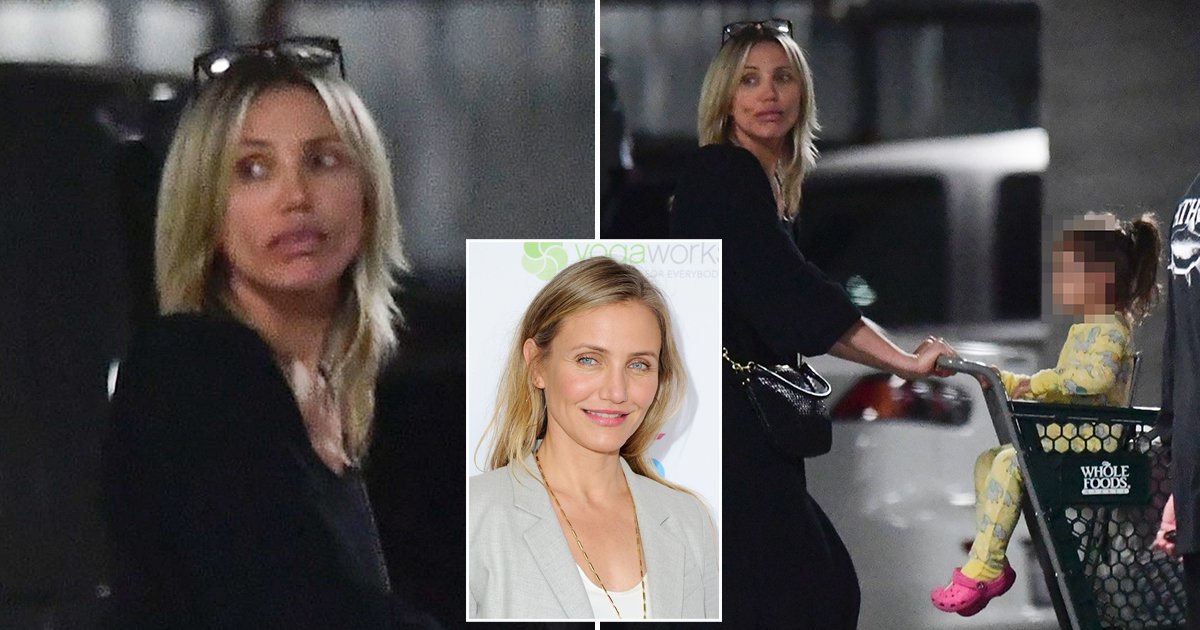 Cameron Diaz was seen with her daughter Raddix on Sunday in Los Angeles, running errands together.

A rare spotting, with the Hollywood actress living life under the radar mostly, their trip to Whole Foods to stock up on food and essentials came hot on the heels of Cameron revealing her return to acting, having last appeared in a film in 2014.

The 49-year-old wore a loose black ankle-length dress, which she paired with khaki sandals for comfort.

The Mask star slung a black leather handbag across her body and wore sunglasses perched on her head as she pushed the supermarket trolley with her two-year-old popped in the seat.

Raddix was in a yellow patterned onesie and an adorable mini pair of pink Crocs.

They were accompanied by Good Charlotte rocker Benji Madden, 43, who shares Raddix with Cameron, his wife of seven years.

The couple were seen enjoying a romantic moment together earlier this month as they shared a kiss while watching Adele perform at American Express presents BST Hyde Park in London.

Cameron recently announced plans to make a return to acting in a new Netflix comedy with Jamie Foxx, her co-star from 1999’s sports drama Any Given Sunday and 2014’s Annie remake, which was her presumed final film.

The actress – also known for big screen roles in the likes of The Holiday, Charlie’s Angels and There’s Something About Mary – confirmed her retirement in 2018, but her husband has been a huge force in her reversing that decision.

Speaking to People, an insider revealed the rock star ‘is very excited’ for his wife and actually ‘encouraged her to un-retire’.

The source said that her upcoming venture is ‘the perfect movie project’ for her return, as she has ‘worked with Jamie in the past and had a blast’, and added: ‘She feels a bit rusty and nervous about it, but mostly excited. She is ready to tackle this movie project.’

Jamie, 54, announced the exciting news, sharing a recording of a call with Cameron – and Tom Brady, their resident expert in ‘un-retiring’.

He tweeted: ‘Cameron I hope you aren’t mad I recorded this, but no turning back now. Had to call in the GOAT to bring back another GOAT.

‘@CameronDiaz and I are BACK IN ACTION – our new movie with @NetflixFilm. Production starting later this year!!’