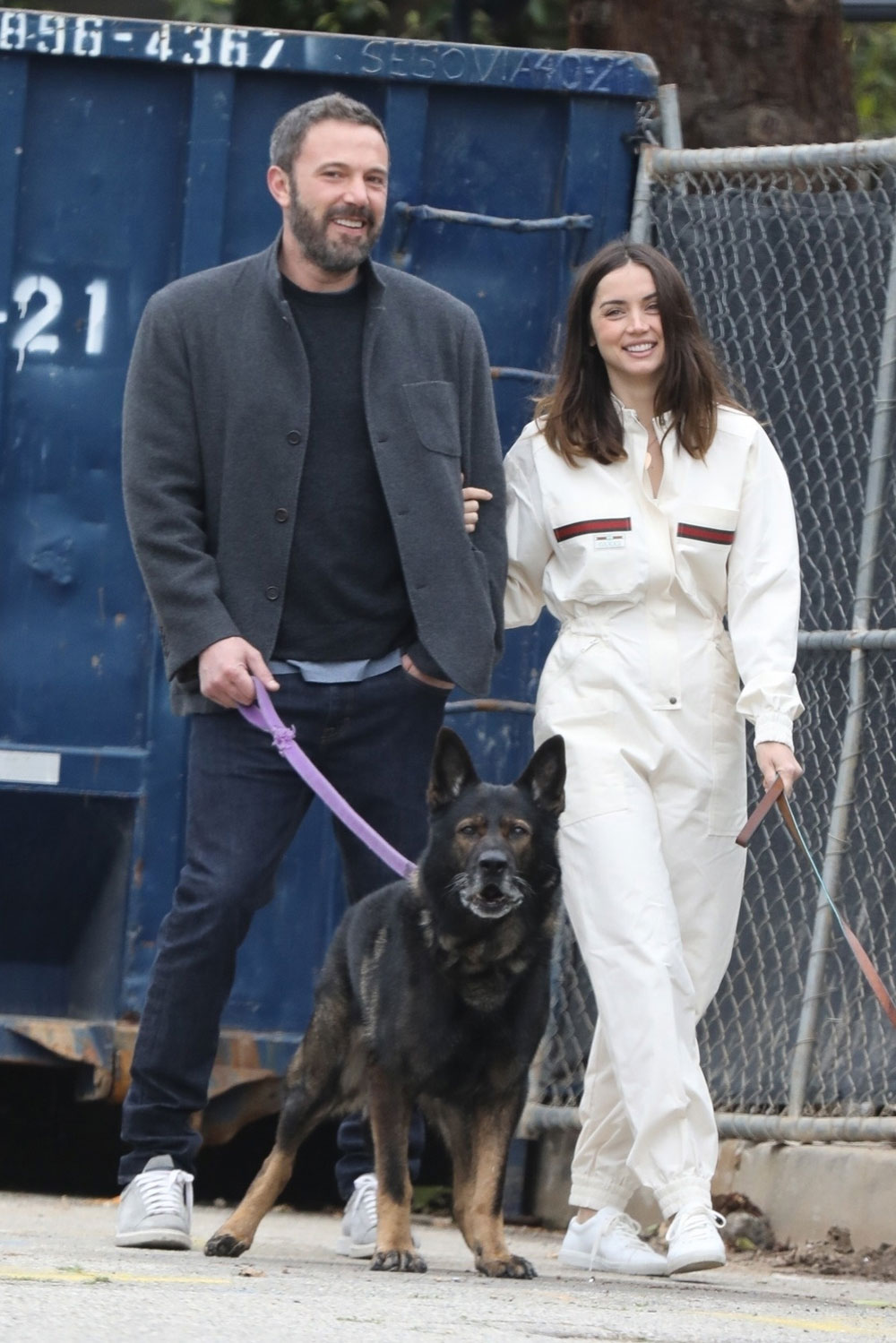 Can you believe that Ben Affleck and Ana de Armas went over a week without doing a pap walk? I made a whole timeline last week and the last time we saw them out together was April 1. They were definitely saturating the market with pics. Plus it seemed tone deaf for them to be doing loved-up pap walks during such a scary and serious time. It was a fun distraction though. The photos and their expressions were so ridiculous that a lot of people assumed this was a PR relationship. (It’s definitely real, come on!)

The good news is that Afflarmas is back! On Thursday they went for a walk in LA and wore masks. (We don’t have those pics but they’re at Just Jared.) Ana was seen driving to Ben’s house on Saturday with her little white dog. On Sunday they took another walk with their dogs. Ana was wearing a white jumpsuit not unlike a Ghostbusters uniform. I was wondering what this reminded me of and then I saw this comment on the Ana de Armas updates Twitter account.

Yes exactly. The Ghostbusters uniforms are khaki but they have the little lines under the pockets similar to this. The parent tweet from an Ana de Armas fan account is ridiculous though. They take her to task for not praying on Easter Sunday or something. That hardcore fan must be fed up with Ana and Ben. I take issue with her lack of a cohesive Easter outfit. At least wear something floral or pastel on Easter! The jumpsuit is Gucci so I’m sure her stylist sent it to her, but Gucci regularly dresses Jared Leto, they’re not known for being particular.

People on that tweet also pointed out that Ben’s dog has a human face and now I can’t unsee it!

They did their signature move where Ana stands on the curb and looks into Ben’s eyes. 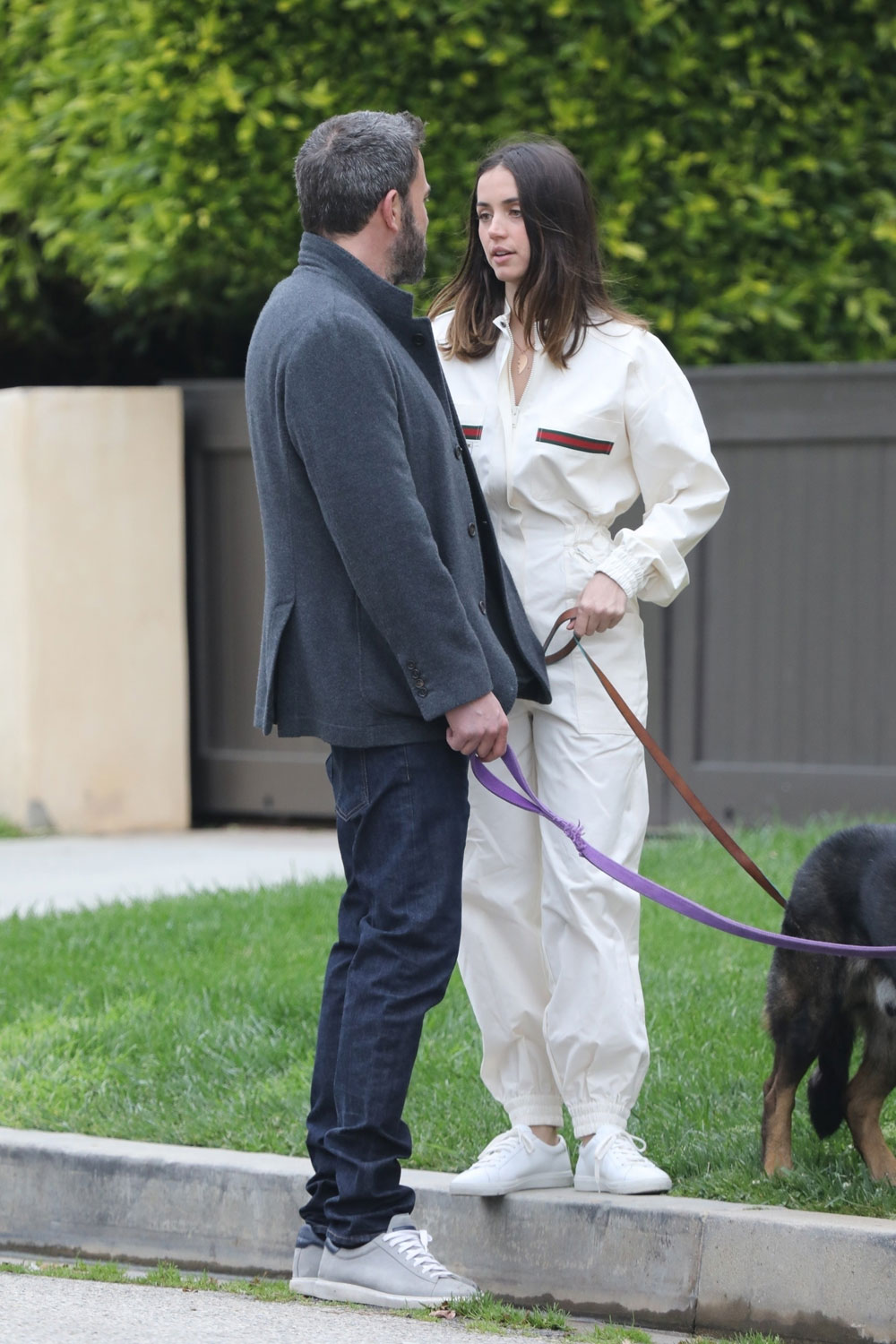 Ana picked up after her dog! You know Ben never does that. 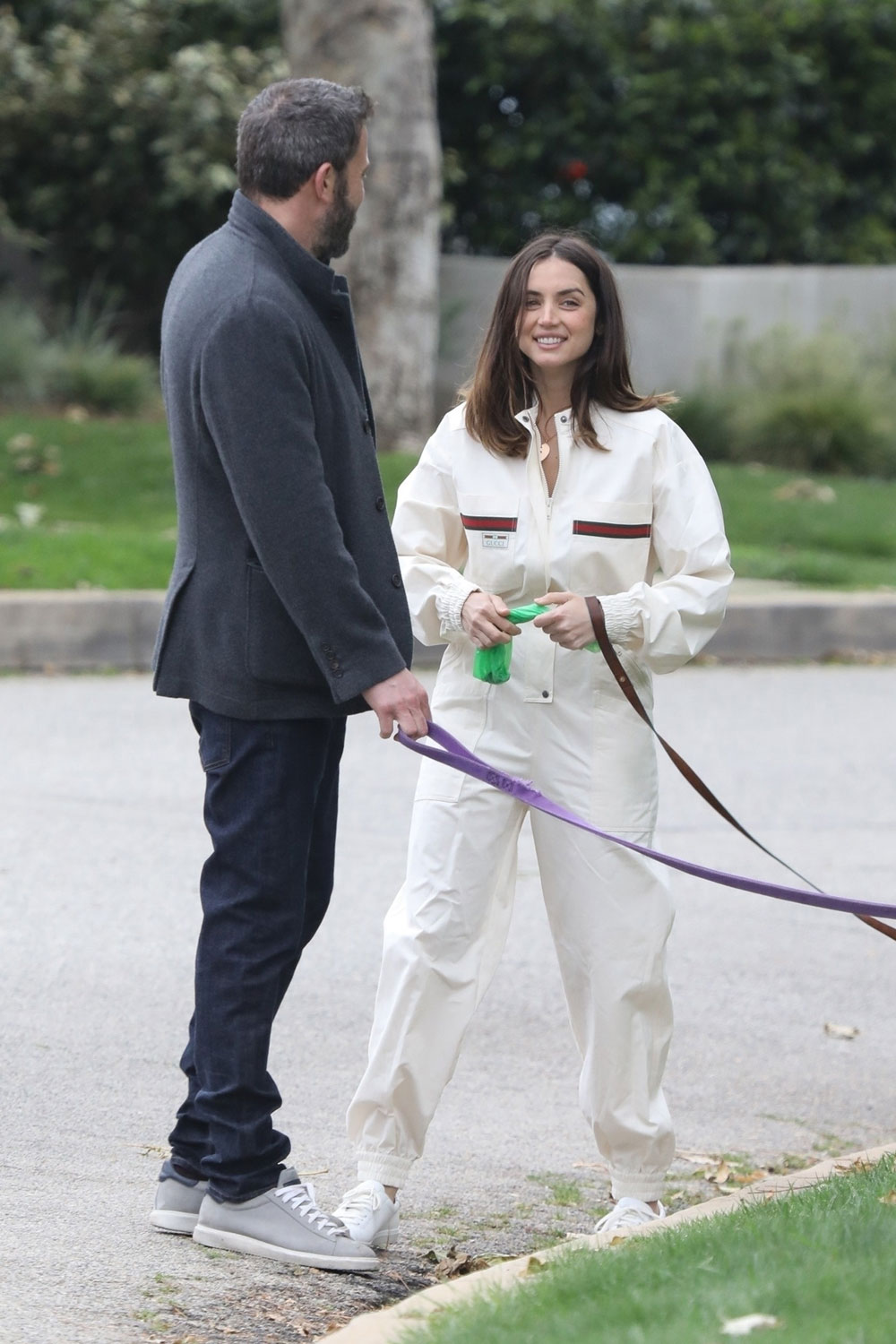 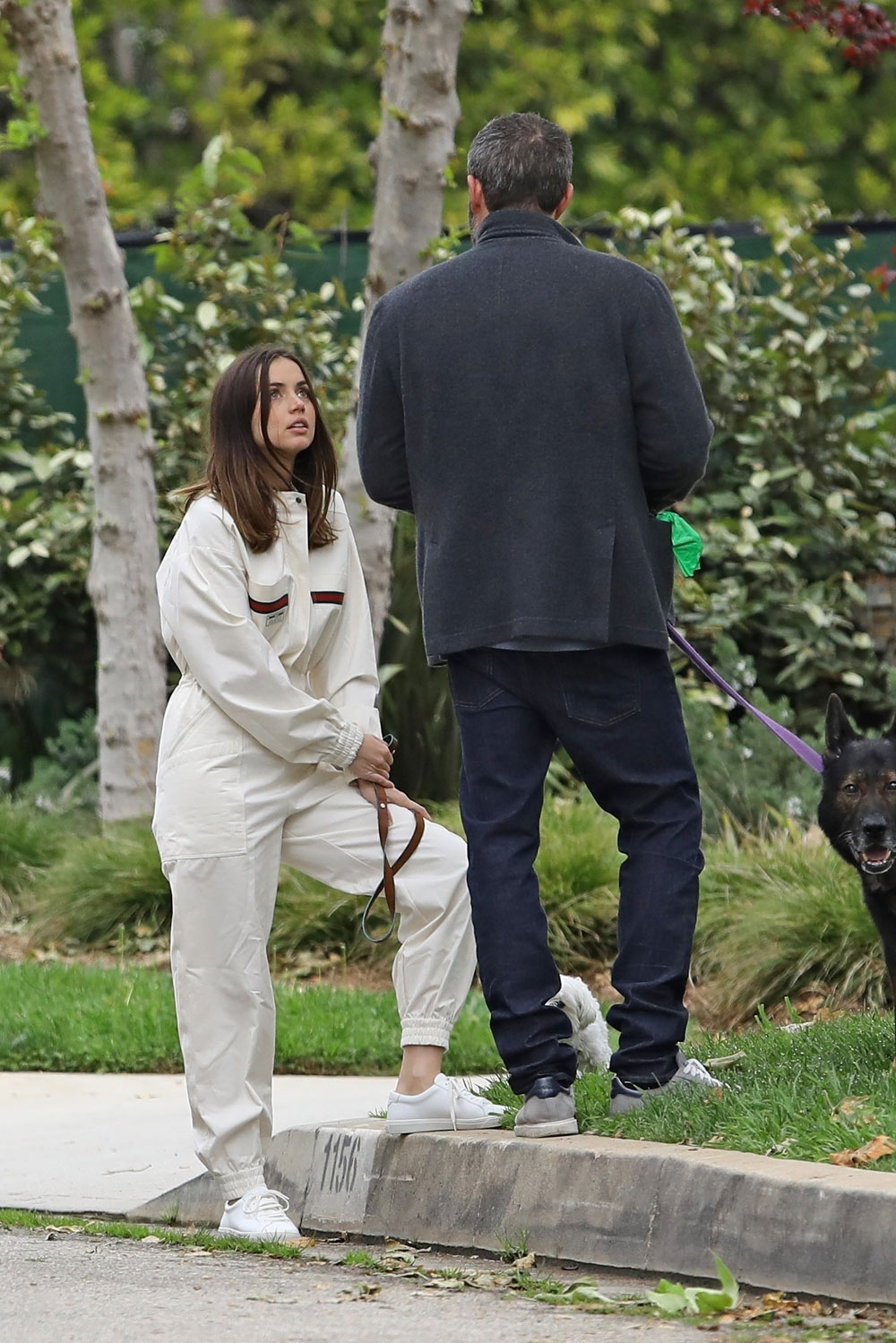 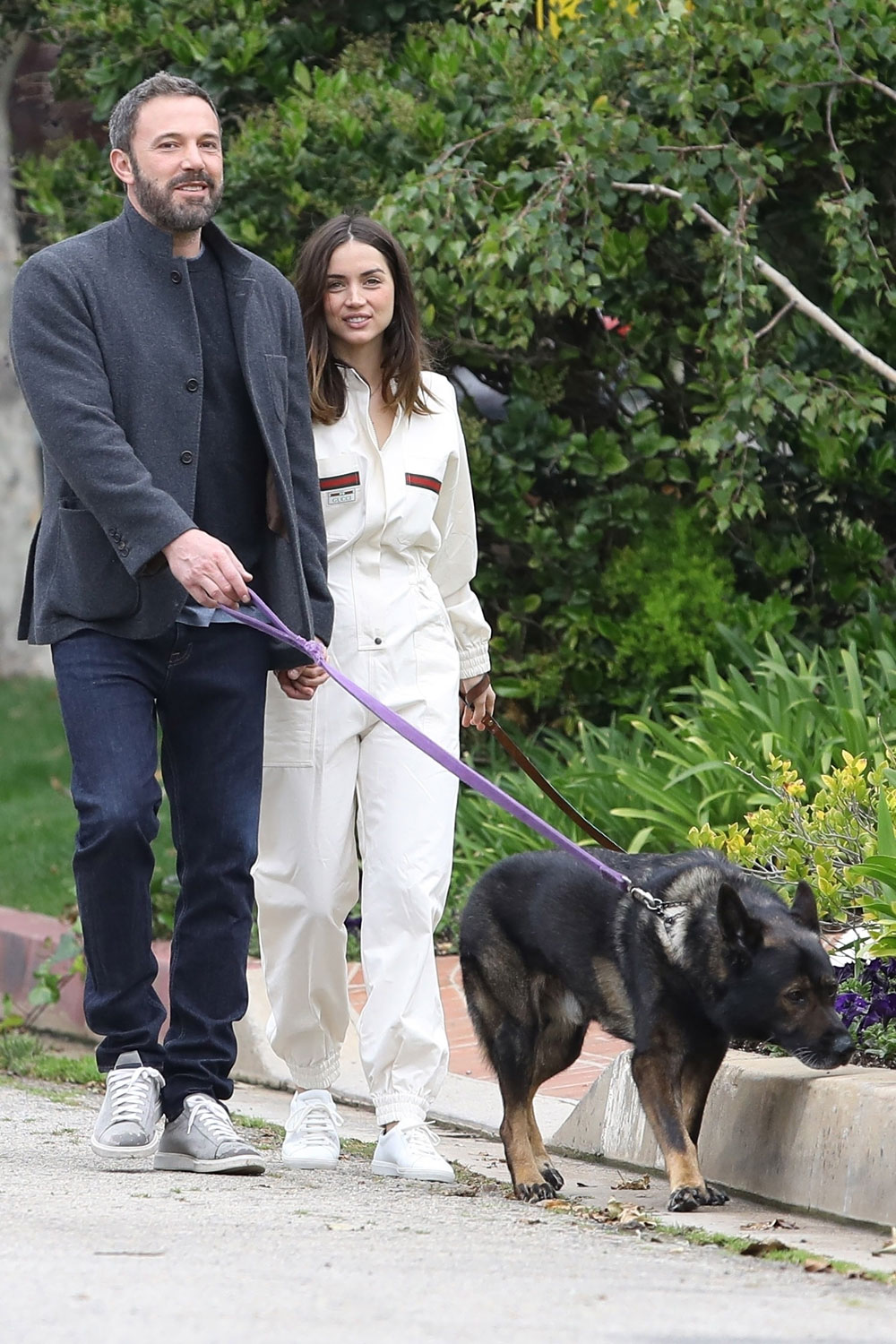