Home » Celebrities » Allyson Felix Is Officially the Most Decorated U.S. Track and Field Olympian of All Time

Anyone who has watched Allyson Felix compete knows that she’s a legend, and the 2020 Tokyo Olympics have given her another opportunity to do what she does best: win medals left and right.

After these Games—which are her first as a mom, to 2-year-old Camryn, but her last as a competitor—she’s coming home as the most decorated U.S. track and field athlete in Olympics history after securing a gold medal in the women’s 400 spring relay alongside Sydney McLaughlin, Dalilah Muhammad, and Athing Mu.

This Olympic medal—Allyson’s eleventh (!!!)—cements her record as the most awarded Olympic medalist in U.S. track ever, breaking Carl Lewis’s previous record. Days before heading to Japan to make track and field history, Felix sat down with Cosmopolitan to talk about why this is her last Olympic run, her adorable partnership with Sanrio, Team USA, and Hello Kitty, and, of course, the Games.

“I really wanted to like embrace everything,” Felix told Cosmo. “You know, each Games has been different, and I really want to give my all.” 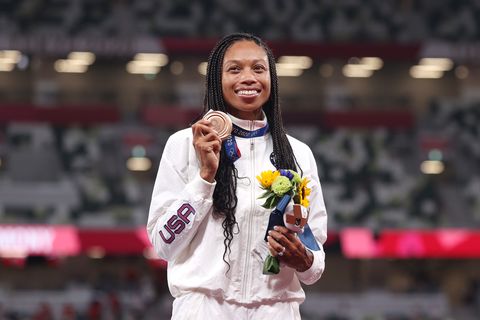 For Allyson, getting in shape for the 2020 Tokyo Olympic Games was demanding in an unusual way, forcing her to train in empty fields and in her neighborhood when COVID stay at home protocols prevented facility access. But returning to the sport at the highest level of international competition was always in the cards for Felix, though coming back after welcoming Camryn through a traumatic birth was a mountain to climb.

“I did know that I wanted to return. But I think I underestimated, you know, what it would take to get back,” she said. “I kind of had imagined that it would all go smoothly, and for me that just wasn’t the case with the birth that I had with my daughter and just other complications. And so I had that desire, but I underestimated just kind of all it would entail to get back.”

Still, she made it happen—in large part thanks to Camryn. “I think really was becoming a mother and really wanting to teach Camryn about overcoming adversity and [building] work ethic and all of those things and just being a good role model.”

Now that she’s breaking records and earning more Olympic medals, she’s taking time to reflect on her own life, even the periods when the Olympics weren’t on her radar yet. “I kind of stumbled into the sport when I was in high school, just because I was trying to meet some new people. So yeah, I didn’t have like those childhood dreams. I mean, once I came into the sport and I fell in love with it, you know, then those kind of dreams formed, but it was a kind of experience.”

The Olympic Dream became tangible as she went through high school and excelled in the sport, pouring herself into it seriously. But while track and field wasn’t always on her mind growing up, her recent collaboration had seeds in her early life. Allyson is partnering with Sanrio, Team USA, and Miss Hello Kitty herself on Hello Kitty x Team USA collections, and it sounds like an actual childhood dream come true. Growing up in California, Allyson was a “Hello Kitty kid” from the start, so the match makes complete sense. “My older cousin Lisa was a huge Hello Kitty fan. And growing up, I would get all of her hand-me-down things. And so partnering with Hello Kitty is something that’s really special.”

Between the winning runs and the records and the partnerships, the 2020 Tokyo Olympics was a record-breaker for Allyson, but it’s also, perhaps surprisingly, her last Olympic Games. When asked why she won’t return in future, she took a beat and then, refreshingly, laughed. “Because I’m 35 now,” she deadpanned. “No, I feel like I have obviously been doing this since I was a teenager and I’ve, you know, I feel so blessed to have accomplished so much,” she elaborated. “I have so many goals. It’ll just be time to move onto the next kind of adventure for me. But yeah, I’ve felt really blessed to have had such a long career.”