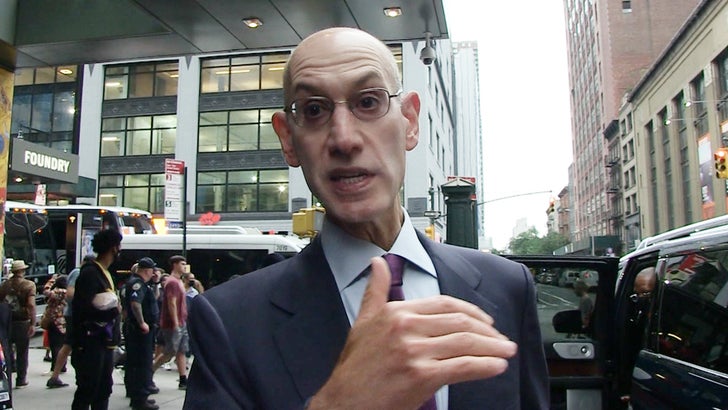 NBA commissioner Adam Silver says he’s smoothed things over with LeBron James about his hatred for the play-in tournament … telling TMZ Sports he believes the Lakers superstar now “understands” the purpose for the extra games.

Remember, LeBron went OFF on the idea of the new tourney back in May … saying, “Whoever came up with that s*** needs to be fired.”

But, the Association went forward with the format for the 2022 season … making things official earlier this week.

So, when we spoke with Commish out in NYC this week … he told us he personally spoke with King James about the tourney — and it sounds like things are allllll good.

“We talked about it,” Silver told us. “I think at the end of the day, I understand. Especially if you went deep last year and you have that end, you have that many sort of games on your legs.”

“You’re not looking forward to more games. But, I think he understands the context of the league.”

Silver says despite James’ initial gripe, it was the NBA Players’ Association that ended up voting in favor … but he’s totally down to collab on a common ground to make both sides as happy as possible.

“At the end of the day, the Players Association speaks for the players, and they’ve approved this format for next season,” he added.

“So, I think we wanted to get one more season under our belt that wasn’t a pandemic season, so we could really get a sense of how it works.”

“But, I’m more open to tinkering with it if necessary.”

There’s more … we also asked about what it’s like to have former President Obama as a new coworker with NBA Africa … and also shelled out some advice for the newest rookie class.