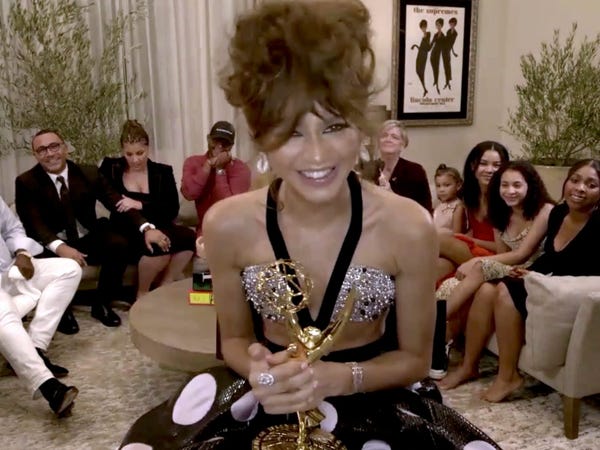 Zendaya's Emmys hairstylist is sharing with fans how to re-create the star's awards-show updo at home.

Zendaya made history on Sunday night at the 2020 Emmys Awards, which were hosted virtually for the first time in history. The "Euphoria" actress became the youngest person to win an Emmy for the outstanding lead actress in a drama series category.

In an Instagram post, Sims shared a photo of Zendaya's bun, which he called the "Bardot Blow Out," referencing the French model and actress Brigitte Bardot.

On Instagram, Sims listed the products he used for Zendaya's hairstyle, which are from Gabrielle Union's hair-care collection Flawless, which she released in collaboration with Sims in August.

Sims wrote that he used the Flawless leave-in conditioner, heat protectant, blow-dry cream, and exotic oil drops. The products mentioned are available for purchase on Amazon for $9.99 each at the time of writing.

Along with her casual bun, the actress, styled by Law Roach, wore a glittery Armani Prive dress with a polka-dot skirt while accepting her award.

In a press release from Sims published by In The Know, Sims wrote that he created Zendaya's hairstyle by using the heat protectant and leave-in conditioner on her hair while it was damp.

He then blow-dried her hair and used a rounded brush, starting at the nape of her neck and working to the front of her hair, while setting each section with rollers to "secure definition and volume."

To complete the look, he secured a ponytail on top of her head.

Sims also styled Zendaya's low bun, which she wore with her first outfit of the virtual awards show: a black and purple Christopher John Rogers dress.

Sims used the same products to style the "Euphoria" star's hair that he did for her casual bun, as well as another product from Gabrielle Union's Flawless collection: a $9.99 edge control hair gel.

Representatives for Larry Sims and Zendaya, respectively, did not immediately respond to Insider's request for comment.