IT'S not uncommon for women to receive unsolicited snaps from pervy blokes looking for some attention online.

But one woman took maters into her own hands by pretending to be a doctor, just to shame one guy's "dreadful little willy". 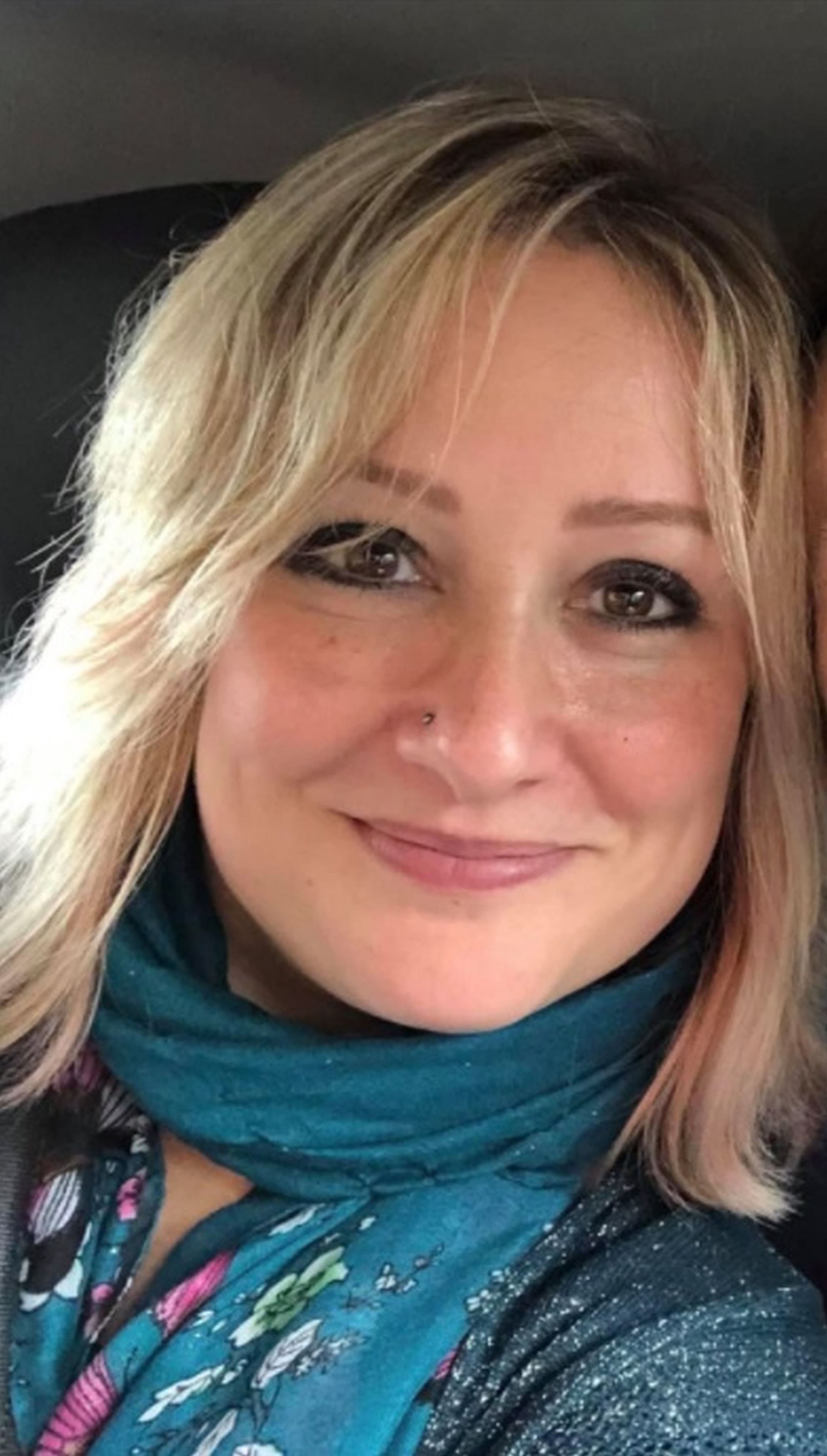 Becky Holmes, 42, claims she was contacted out of the blue by the bloke on Twitter who preceded to send her snaps of his manhood.

This picture adds the to growing number she said she's received from random blokes since joining Twitter in August.

This picture, however, was of a "tiny shrivelled insignificant penis", followed by a string of crude messages "complimenting" her lips.

Shocked by the forwardness of the bloke, she decided to take a "medical" approach with her reply and pointed out a number of "issues" she saw with his nether regions. 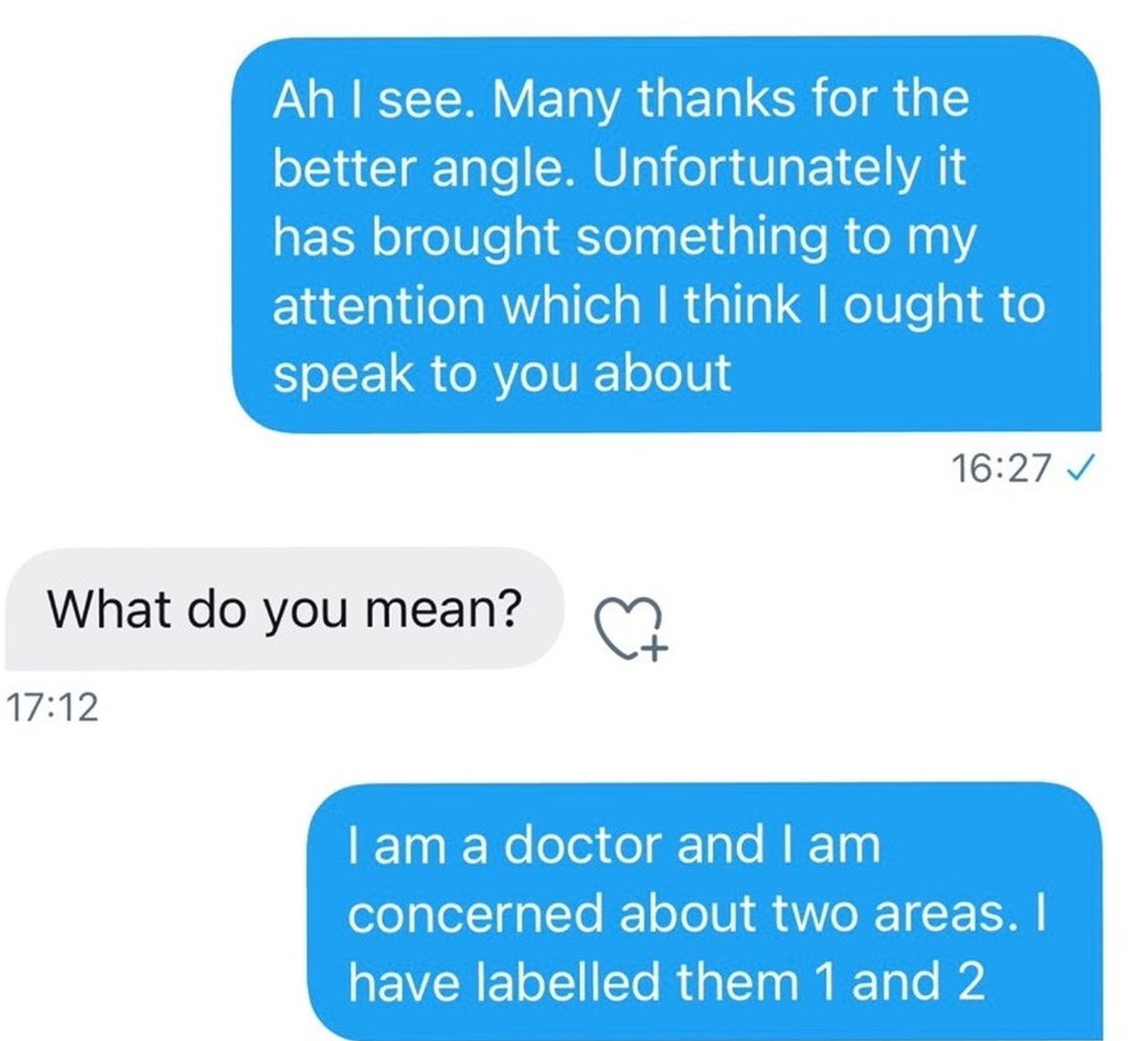 She took aim at the "yellowing jaundice" in his pubic hair, raised concerns over his weight and even a pointed out a rogue mole.

In the exchange, the man began debating about whether his mole was OK and said he'd had it checked by a doctor – but prankster Becky warned him the end of his manhood may "turn black and wither".

Taking it one step further, Becky hilariously dished out a fake "prescription" – complete with a bogus NHS logo – ordering him not to send unsolicited explicit content to women again.

She then wished him a Merry Christmas and reported him to Twitter.

Becky, from Stratford-upon-Avon, Warwickshire, said: "I don't understand what it is about men where they feel they've got to display everything. 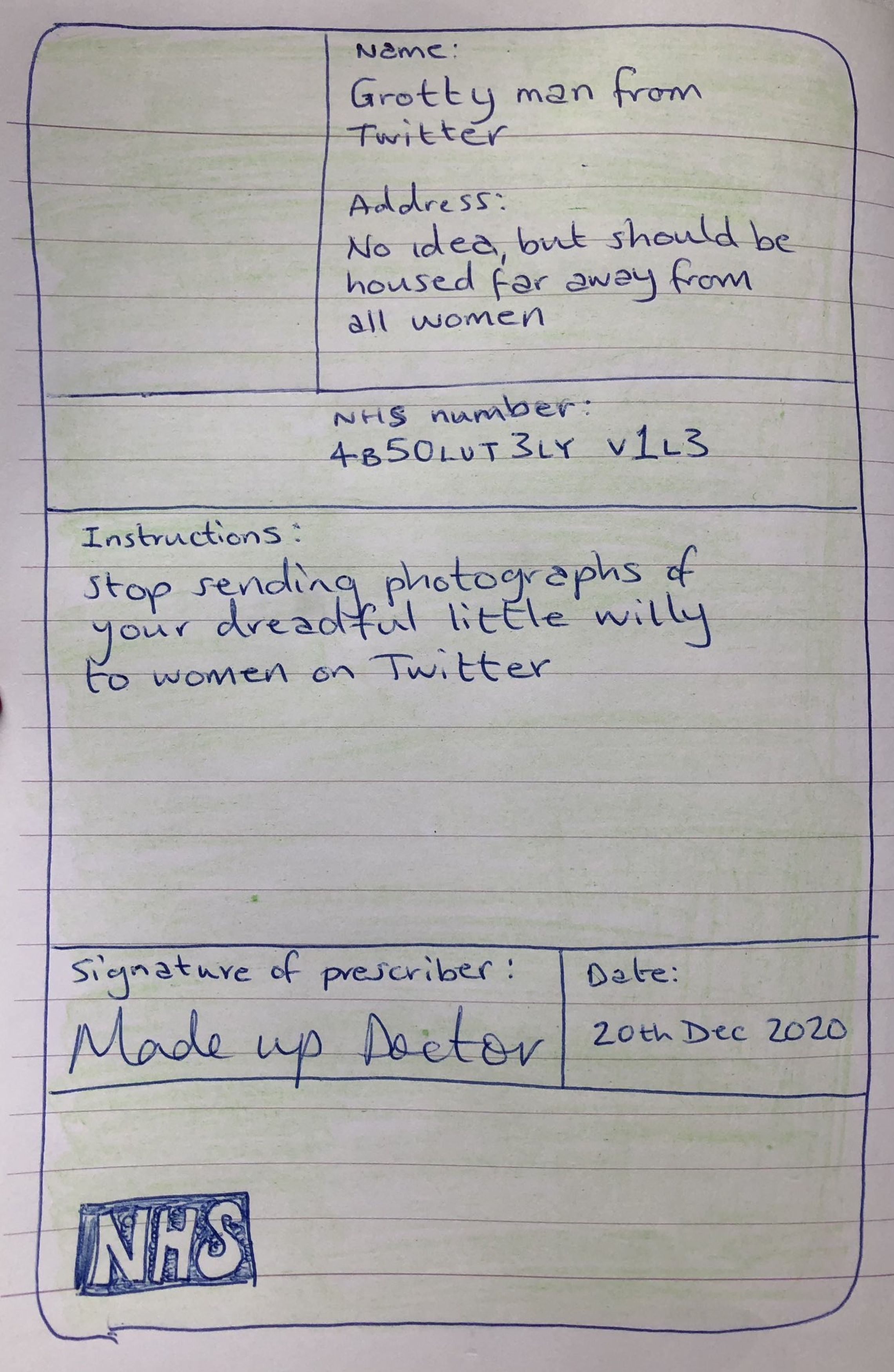 She continued: "For me it was a case of opening it and laughing thinking 'what on earth is that'?"

The sleazy man in question sent Becky a stream of extreme close-up pictures along with crude requests over a number of days – and it was only after three days she revealed she wasn't actually a doctor.

Explaining why she thinks blokes send such rude pictures and messages, Becky added: "I think it's for the shock factor. 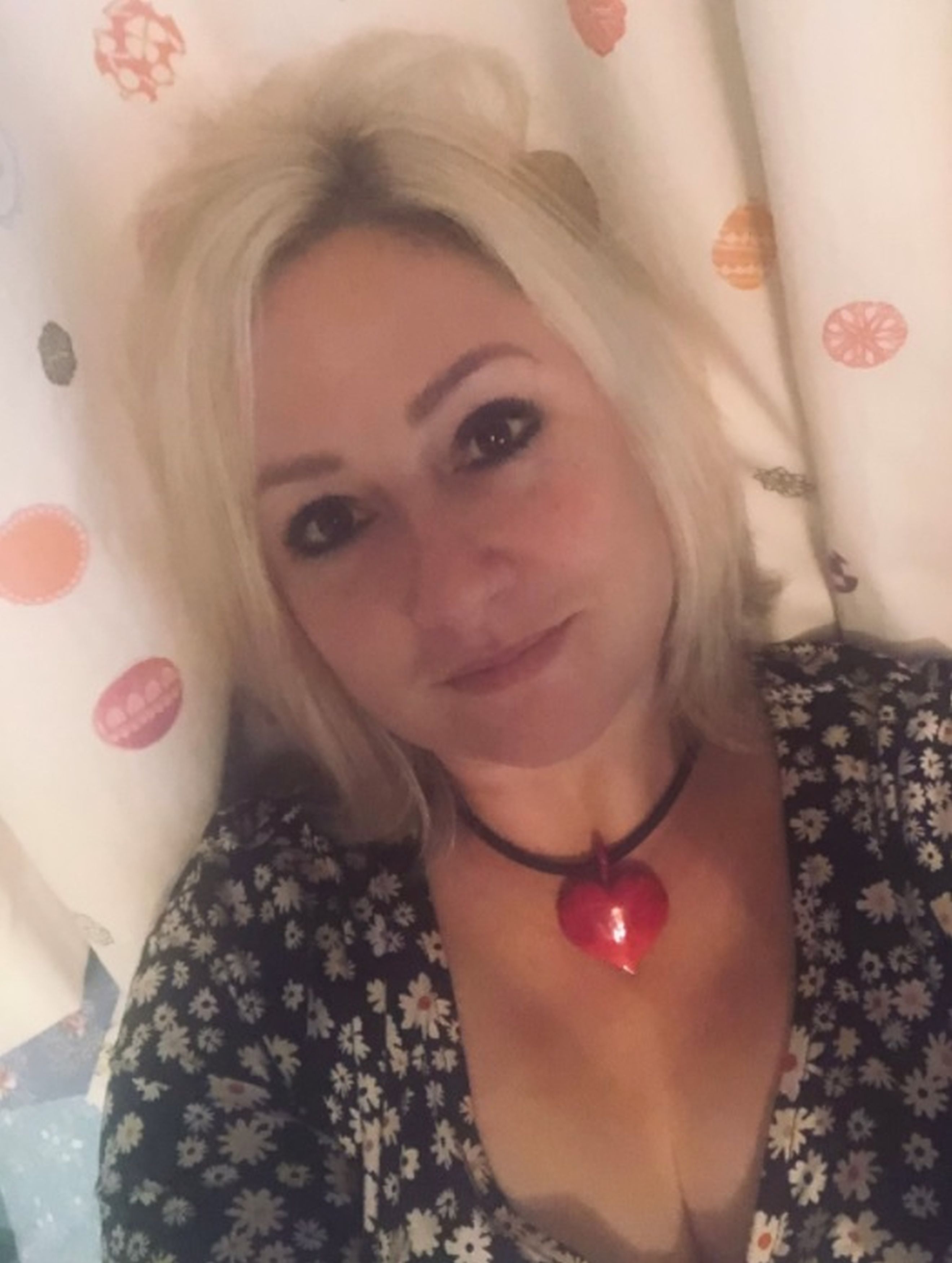 Becky added: "This guy didn't understand what was happening. I think he thought I was genuinely a doctor. It just amused me at the time."

She said: "I just feel if you approach it in the right kind of way then humour is sometimes a good way to get people talking.

"So many of the people joining in on the fun are men, saying 'God I'm so sorry for the rest of my gender, I can only apologise'."

On day four of the exchange, Becky "broke cover" revealing she wasn't a doctor then rammed home the message that such behaviour is unacceptable. 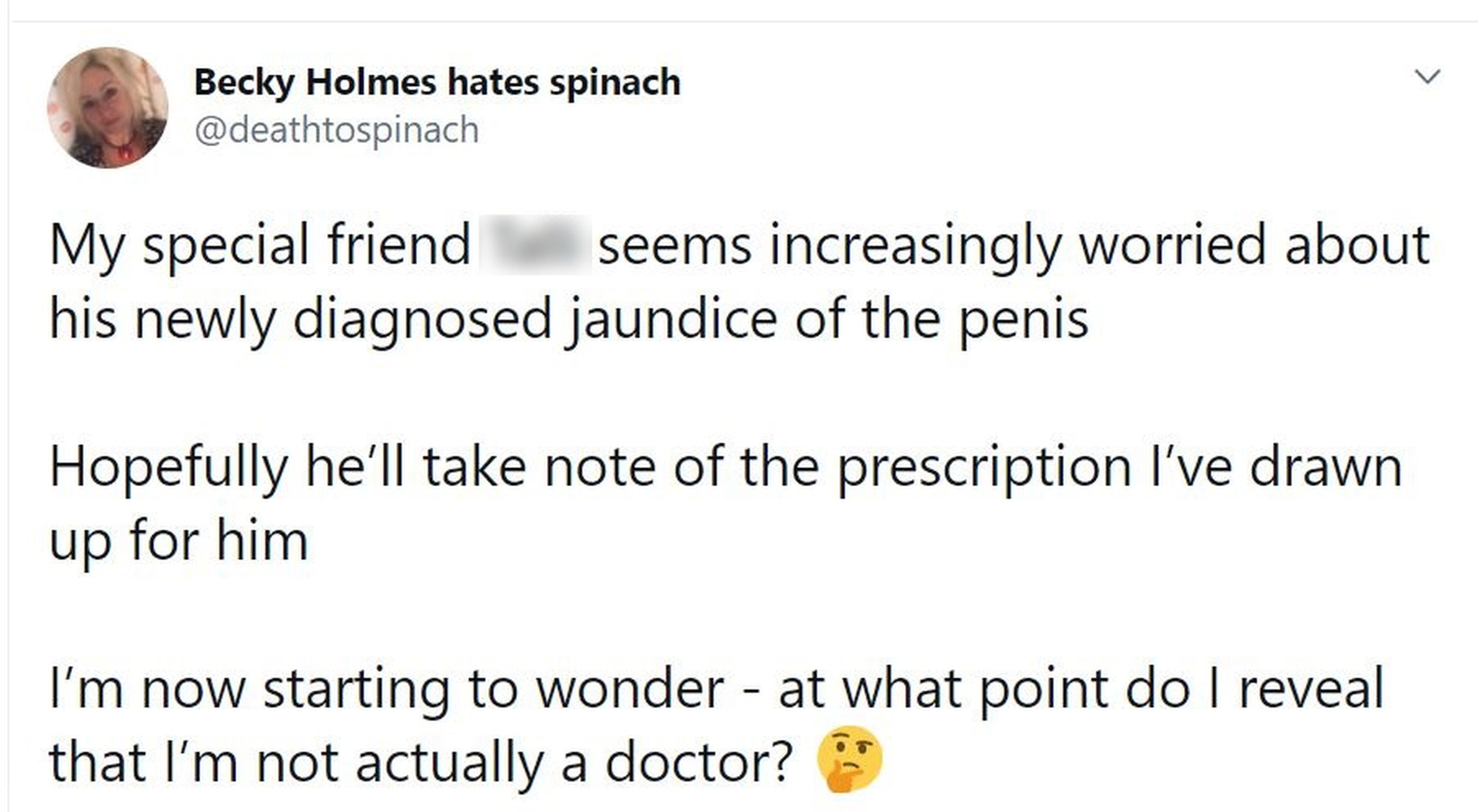 Her reply read: "This is the situation… Every single day women are subjected to perverts like you – men who send them photographs of their genitals and crude descriptions of what they want to do to them.

"I am the worst kind for people like you, because I am the sort that will share your images across Twitter and have thousands of people laughing at you, which is exactly what I have done.

"Women do not want these images. Ever.

"I don't know whether you possess the intelligence required to feel any level of shame, but I hope you do, and I hope it stops you from ever sending a photograph of your tiny, shrivelled, insignificant penis to any other woman, ever again. Oh, and Merry Christmas."

Twitter's rules state: "While some consensual nudity and adult content is permitted on Twitter, we prohibit unwanted sexual advances and content that sexually objectifies an individual without their consent.

"This includes, but is not limited to: sending someone unsolicited and/or unwanted adult media, including images, videos, and GIFs, unwanted sexual discussion of someone’s body, solicitation of sexual acts and any other content that otherwise sexualizes an individual without their consent."

Meanwhile, a woman, 24, who received an unwanted pic of a ‘small, disgusting’ penis gets revenge by telling the lad’s MUM.

Plus this woman has the best comeback for a creepy bloke who asked to see her wearing a bikini she was selling.

And a woman receives a wrong number text about someone’s cheating boyfriend and sends the perfect response back.