Va va voom! Rihanna stepped out for dinner at Ballato’s NYC, which is owned by Katie Holmes BF Emilio Vitolo. The star stunned as she rocked a super sexy top and vintage YSL jacket.

Rihanna, 32, just turned the sidewalk into her runway! The Talk That Talk singer slayed as she stepped out in New York City for dinner on Wednesday, Jan. 20. RiRi showed some skin as she rocked an open blouse revealing a chocolate brown bra, likely from her own Savage X Fenty lingerie line. She paired the revealing top with a pair of loose fitting jeans, a vintage fur YSL jacket, and a mustard yellow duster for a ’70s inspired look. 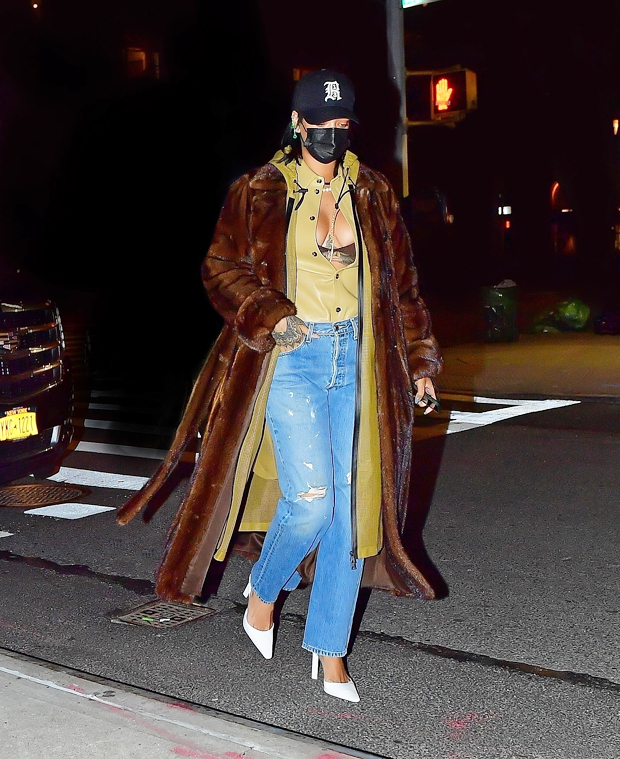 Accessorizing with various chain necklaces around her body and under the blouse, she finished the look with a pair of white pump heels, and a logo hat from streetwear label R13. The Ocean’s 8 actress also sported a protective black face mask as she approached NYC hotspot Ballato’s, which is owned by Katie Holmes‘ boyfriend Emilio Vitolo. Rihanna was joined by flame A$AP Rocky, 32, however, the pair arrived to the eatery separately. The dinner date came after the pair celebrated Yams Day, which was started by Rocky — née Rakim Mayers — in honor of the late A$AP Yams. Yams, who was born Steven Rodriguez, started the A$AP mob back in 2006. He sadly died in 2015 at just 26 years old.

Prior to linking up again romantically, RiRi and A$AP attended the same event together in Jan. 2020. They were all smiles in a series of goofy photos as they posed backstage, holding fake money with the face of Steven/A$AP Yams. Rihanna and Rocky were seated in the audience together as they enjoyed the festivities, which was fresh off her break-up from billionaire Hassan Jameel, 32, after three years of dating.

Recently, Rihanna took A$AP back to her native of Barbados to celebrate the Christmas holiday with her family! The new couple were seen holding hands as they approached a boat for a romantic ride on the water, clearly not shy about displaying their PDA for the world. “It’s a huge sign of how happy she is with him. Rihanna is all about family so the fact that she invited him is very meaningful,” a source previously told HollywoodLife. “Her friends are taking this a sign that she’s getting serious with him,” the insider added.

Rumors around the couple have swirled for years, dating back to A$AP’s 2013 video for “Fashion Killa.” Rihanna played his love interest in the romantic clip, with many believing the romance was also an off-screen hookup. They have seemingly remained friendly over the years, with RiRi even including A$AP in her recent Fenty Skin campaign.