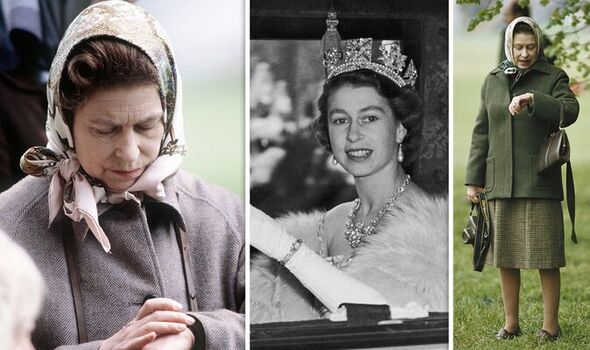 The Queen has an array of beautiful jewels, but according to the book The Queen’s Jewels: The Personal Collection of Elizabeth II, Her Majesty has at least 14 watches in her collection. Looking closely at old and new photographs, the monarch is spotted wearing the most elegant and timeless watches as an alternative to her usual elaborate, lavish wristwear. The experts at Watch Repair Piccadilly have analysed some of the Queen’s most classic pieces – including one that’s worth £3million.

Her Majesty chose this delicate timepiece to wear at her Coronation in 1953.

The tiny watch is one of the smallest in the world and fascinates watch experts with its minuscule mechanical capabilities.

According to royal experts, the Queen wore this “rare Jaeger-LeCoultre so she could discreetly check the time during the ceremony”.

Thanks to its ethereal quality and graceful aesthetic, it was the perfect choice for her Princess to Queen transition.

For her Diamond Jubilee in 2012, she received a poignant gift; a specially made white-gold replica of her Coronation Jaeger-LeCoultre Calibre watch.

The watch is still being made, but only in limited numbers, and costs £135,000 to purchase.

The Queen’s watch, however, would be worth around £3million according to H&T pawnbrokers.

Vacheron et Constantin is the oldest manufacturer of fine watches, and their everyday timepieces are on the current market for around £30,000.

The Queen’s model was gifted to her by the Swiss Federal Council when she married Prince Philip.

The experts said: “This timeless diamond set cocktail watch is perfect for a princess due to its dainty and regal aesthetic.

“The stylish piece was passed down to Princess Diana after she married Prince Charles in 1981.

“The exquisite craftsmanship behind this watch and regular professional watch servicing will ensure it lasts a lifetime.”

Omega is the ultimate classic watch brand, and the Ladymatic is famous for being the first automatic ladies’ wristwatch.

The Queen jumped on the new watch wear trend in the 50s and has been seen wearing it through the decades.

“Due to the vintage design, we imagine this watch is maintained by Omega themselves every four to six years for smooth-running mechanics and an even smoother-looking surface,” the experts commented.

“One word that describes our Queen would be pragmatic,” the watch experts said. “So it’s no surprise that one of her favourite, most-worn wristwatches is the practical and functional Audemars Piguet Jules Audemars in gold.

“She chose this understated and decorous piece to address the nation during the 2020 Covid Pandemic.

“It is refined, versatile and iconic and is sure to be passed down to Princess Charlotte someday,” Watch Repair Piccadilly suggested.

The grandest timepiece in The Crown’s collection is the diamond and pearl Patek Philippe watch.

This watch is so decadent that it was loaned to the Patek Phillippe Watch Art exhibition at Saatchi for the public to ogle.

“Its striking appearance is due to the baguette-cut diamonds framing the watch face and the pearl lined straps,” the experts said.

“This unimaginably expensive watch has adorned her wrist only a handful of times.

“It is selected only for special occasions when mixing with other high-profile figures to reiterate her powerful status, the Queen of England.”