Paris Jackson and close pal Cara Delevingne looked absolutely gorgeous together as they hit up a post Oscars party in contrasting white and black outfits.

Paris Jackson and Cara Delevingne dressed to the nines and went out to a private post Oscars party together on Sun. Apr. 25. The late Michael Jackson‘s 23-year-old daughter looked sensational in a long, white slip dress by designer Monique Lhuillier that featured a nearly hip-high slit up the left side. The gown featured slight criss-cross draping across the chest, and Paris donned chunky black platform shoes to give the super feminine dress an edgier look.

In a photo that Monique posted to her Twitter page with the caption “Oscar Night,” Paris was seen with her arm intertwined with Cara’s as if they were posing for a date night photo. In paparazzi snapshots of two two later in the evening, the pair didn’t show any outward PDA, but were all smiles when getting into the back of their chauffeur driven car together.

Cara went with a stylish menswear look. The 28-year-old Carnival Row star donned fitted black pants and a black and white sleeveless tuxedo top by Dutch couturier Ronald van der Kemp. It featured a white ribbed panel down the front of a black top  with high side cutouts. On the designer’s Instagram page he asked “Why wear a gown for the #oscars when you can look like this? @caradelevingne in our tuxedo top en pants.”

Both women have eschewed labels when it comes to their sexuality. Cara’s last romance was her two year relationship with actress Ashley Benson that ended in May 2020. Paris and her boyfriend of two years Gabriel Glenn called it quits in Aug, 2020. 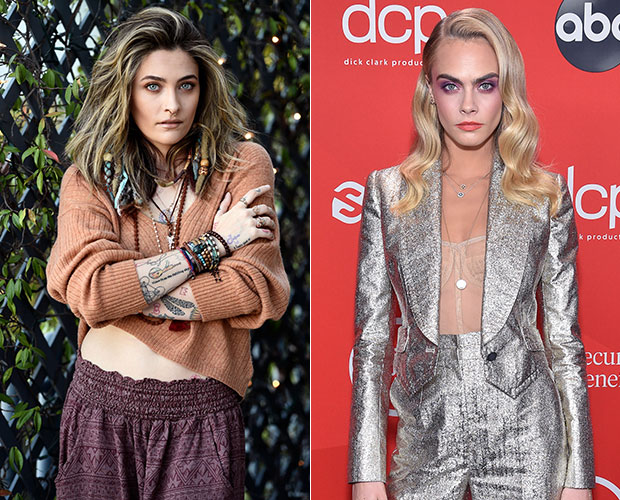 “I don’t feel like there is a label for my sexuality that fits. Labels in general, not just for sexuality but for everything, I think, are just ways for humans to make sense of the world, to be able to compartmentalize,” Paris previously told People. “We’re getting past the need for labels. It’s beautiful.” As for Cara, she is attracted to all genders, telling Variety in June 2020, “I always will remain, I think, pansexual. However one defines themselves, whether it’s ‘they’ or ‘he’ or ‘she,’ I fall in love with the person — and that’s that. I’m attracted to the person.”