Home » Beauty and Fashion » Olympic skier Lindsey Vonn responded to critics of her swimsuit pictures, saying she’s ‘perfectly fine’ with not being a ‘size zero’ 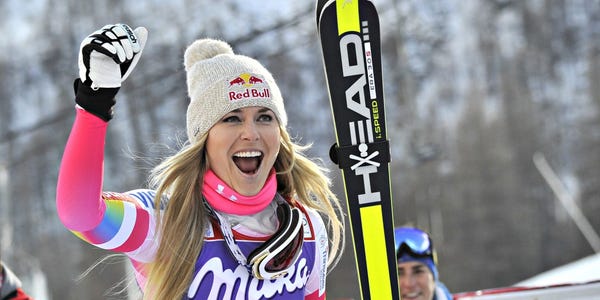 Lindsey Vonn took a stand against critics who criticized bikini pictures she's recently shared on Instagram, and people are applauding the athlete's response.

Vonn, 36, is a four-time Team USA Olympic alpine skier who became the USA's first women's downhill skiing champion at the Vancouver Winter Olympics in 2010. She announced her retirement from the sport in 2019.

On Friday, she shared an Instagram post addressing comments she received on her recent pictures. Vonn wrote that posting photos where she's wearing a swimsuit can be "scarier than it seems."

"Even as an athlete, there are ruthless comments and media stories that tear apart my body, and I admit it sometimes hurts me," Vonn wrote.

Vonn continued, saying that despite being a subject of media coverage, she's human.

"I'm a normal person and sometimes I slouch, my stomach folds over, my cellulite shows on my butt, or I don't fill out my swimsuit top just right," Vonn wrote. "But, I always remember how my body has helped me achieve amazing things in my life and I am proud of how strong I am."

Vonn added: "I'm not a size zero and that's perfectly fine with me."

She went on to say that she "never" alters her pictures with photo-editing software and hasn't had "plastic surgery of any kind."

"I am 100% natural and 100% Lindsey. So to anyone who is feeling self-conscious or down about their appearance; stay strong, stay healthy, and love yourself no matter what the haters say," Vonn wrote.

Supermodel Ashley Graham, who is known for her own candid social-media posts that aim to celebrate features like cellulite and body rolls, was one of many stars to comment on Vonn's post.

"All I see is a beautiful woman living her best life," Graham wrote.

Iskra Lawrence, a British model who was one of the first faces of Aerie's photo-editing-free campaign, also commented on Vonn's message.

"So important, and to remind us all our bodies are so much more than societies' beauty ideal. I'm so proud of you I know how hard it can be and reading all the hate but still knowing you're worthy and beautiful no matter what," Lawrence wrote to Vonn in a comment.

Female athletes have long been the target of body-shaming comments

Like Vonn, other Olympians and professional athletes have spoken up about dealing with comments about their bodies.

American tennis legend Serena Williams has been vocal about being the target of criticism related to her physical features.

"I was constantly told I was too muscular, or I wasn't pretty enough to be a tennis player," Williams said in an interview with Elle in 2018. "I learned to ignore the negativity and look inwards to truly love myself. I realized I was in control of my feelings and focused on rising above the negative chatter and the unrealistic societal ideals placed on me."

Williams also opened up about body image in an essay she wrote on Reddit in 2017, saying: "I've been called a man because I appeared outwardly strong."

Team USA Olympic gymnast Aly Raisman is another athlete who's spoken about being body-shamed. She took to Twitter in 2017 to share her thoughts after a TSA agent at an airport had apparently commented on her muscles and another officer "shook his head" in regard to her figure.

Representatives for Lindsey Vonn did not immediately respond to Insider's request for comment.