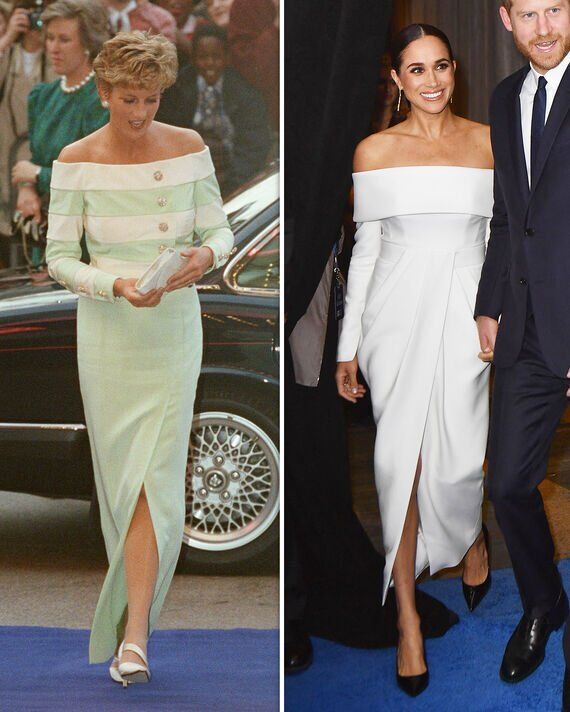 Earlier this week, Meghan Markle stepped out to attend the Ripple of Hope Award gala in New York City. For the occasion, she wore a custom-made white Louis Vuitton dress and it bore an uncanny resemblance to a dress Princess Diana once wore.

Meghan’s dress was made by Nicolas Ghesquière for Louis Vuitton, and it was her first time wearing the French label at such a high-profile event.

The dress was long-sleeved with a puckered waistband, a slit in the skirt and an off-the-shoulder neckline created by a thick bandeau.

Vogue said “the shade of Markle’s dress was significant” as white “symbolises peace” which was a “thoughtful nod to the philanthropy work” Meghan and Harry do.

The iconic fashion brand also said the shape of Meghan’s dress was “right in line” with her “clean, modern wardrobe”.

Vogue also said it “featured a few of the same details” as her wedding dress; off-the-shoulder, long sleeves and a “minimalist, architectural aesthetic”. They referred to it as “her signature style”.

The Duchess accessorised with Princess Diana’s aquamarine ring – the same ring she wore on her wedding day for the evening reception.

She also wore a pair of Carolina Herrera – a brand Meghan regularly wears – earrings which were gold plated and embellished with crystals in different shapes, said to be priced at £155 or $190.

Meghan was photographed with a Givenchy black satin clutch with a jewellery clasp. This is not a new bag, it has been in Meghan’s wardrobe for quite some time and she has stepped out with it eight times before.

In terms of shoes, Meghan chose a pair of black pumps to complete the outfit.

Princess Diana, on the other hand, stepped out in a very similar dress.

Back in 1993, the Princess arrived at the West End Odeon in Leicester Square for the premiere of The Accidental Hero, in aid of MENCAP which she was the patron.

It too had long sleeves, and a slit up the front, unlike Meghan’s dress though, Princess Diana’s dress didn’t have a bandeau across the shoulders.

Princess Diana’s dress also featured large gold buttons, five were off-centre down the bust and waist, and then three buttons on each sleeve.

The royal chose a pair of pearl satin heels which had a horizontal strap across the front of the foot. She also carried a rectangular pearl-coloured clutch bag.

Others suggest Meghan took a leaf out of Kate Middleton’s style book, as she stepped out in Boston that same evening wearing a bright green off-the-shoulder dress.

Kate’s dress was from Solace London, and it was the Sabina off-the-shoulder maxi dress in bright green, which she had rented for the occasion.

The dress had a “body-conscious fit” and was lined to “sculpt the body”. It featured a “concealed closure belt to define the waist” and had a “signature high kick split”.

To accessorise, Kate wore Princess Diana’s emerald and diamond choker. The stunning piece hasn’t been seen since Diana herself wore it. It was a favourite of Diana’s, who not only wore it as a necklace many times between 1981 and 1997, but she also wore it as a headband in 1985 during her and Prince Charles’ tour of Australia.