A promise made between siblings is the real deal – no matter how much time passes, or under what circumstance the promise was made.

But when one man made a promise to his sister five years before her wedding day, she had no idea he would ACTUALLY go ahead with it – and she was not impressed when he turned up with an unexpected guest. 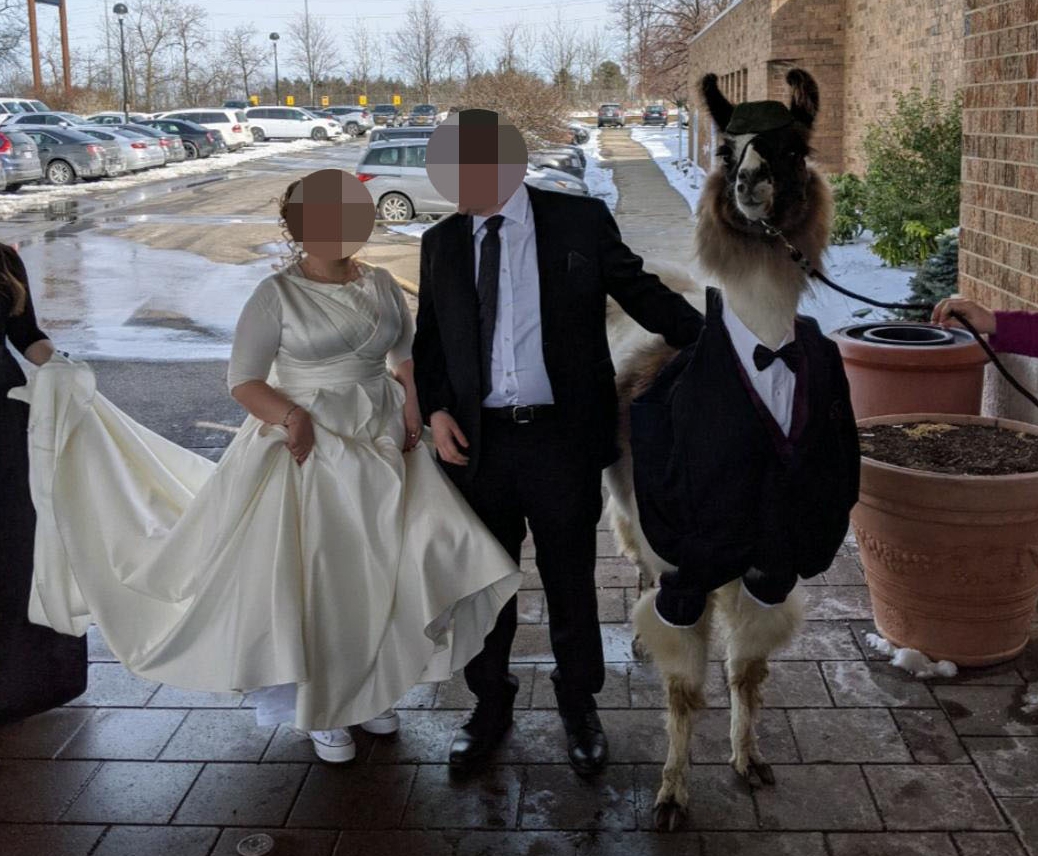 Mendl Weinstock,  from Ohio, USA, attended his sister's wedding with a tuxedo-clad llama by his side, much to the dismay of his sister Riva who was left outraged by the revelation.

Upon the news of her engagement in October 2019, Mendle quickly got to work in locating an Ohio llama farm that would rent him a llama for the big day and even enlisted the help of a friend who helped him craft the llama-friendly tuxedo for the special occasion.

You see, in 2015, the former camp counsellor jokingly told his sister Riva that when the time came, he wouldn't attend her wedding she'd been fantasising about since she was a young girl.

With the remark not sitting well with Riva, Mendle continued to torment his sister and threatened that if she did make him attend her future celebration that we would bring a llama as his guest.

So when Riva actually became engaged in 2019, she had no idea her brother would stay true to his promise made years earlier – but unfortunately for her, Mendle had no intention of going back on his word.

Needless to say, upon first laying eyes on Sparky the llama on her wedding day, Riva was not impressed.

Speaking to Buzzfeed, Mendle said: "My sister walked outside and had this humongous gaping looking on her face – there's nothing that can really prepare you for walking outside and seeing a llama."

Naturally, Sparky the llama was a hit amongst the wedding guests, with many stopping to meet the friendly animal as he waited outside the venue greeting guests as they arrived.

However, Sparky's true rise to fame was on Redditt, where the photo of him in a tux gained him overwhelming popularity amongst the Reddit community.

After being shared to the Reddit Pics thread, among others,  the hilarious snap has racked up over 3,600 comments and received over 157,000 upvotes within the first three days of being posted.

One Redditor joked: "What a dapper llama melodrama. I wonder, is the farmer rather calmer?"

While another said: "Damn llama totally took the spotlight away from the bride on her special day, you cold as hell OP but your services are appreciated to the internet folks."

And a third hilariously recalled: "I saw a post recently requesting dimensions for an adult llama in regards to making a tuxedo… I thought "surely not"… now I know."

Although the stunt left Riva some what unimpressed on her big day, Mendl insists that she has since come around but vows to get her revenge on her brother in one way or another.

In other wedding news, one couple use a name generator to get a hashtag for their wedding and are mortified by the cheeky results.

While this cruel bride brutally told her two best friends they can’t be her bridesmaids because they won’t look good in crop tops.