Home » Beauty and Fashion » ‘I’d do it all again’: Celeste Barber responds to fire fund critics 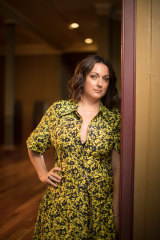 Comedian Celeste Barber has responded to allegations her $52-million bushfire fundraising effort was misguided or lacked adequate homework by saying she'd "do it all again".

As she prepares to make her runway debut at the Virgin Australia Melbourne Fashion Festival on Thursday night, the comedian and Instagram star has reflected on one wild summer in her 37-year-old life.

"It's pretty incredible, I find it quite overwhelming still, especially when I talk to my in-laws [who lost their home] about it because that's why I started it, they were in trouble," she said.

As the summer's bushfire crisis unfolded, Barber used Facebook to launch a fundraising drive that began with a goal of $30,000 but ultimately raised more than $51 million.

But as Barber's initial call-out only specified the NSW Rural Fire Service Donations Trust, the money technically and legally needs to be allocated to funding equipment and support for the service, not bushfire victims, unless a legal or legislative exemption is granted.

Asked whether there was anything she would have done differently, Barber was unapologetic: "Nah. I would have raised more. I would have kept it going … No person would go, I probably wouldn't raise $52 million because I got backlash … I'd 100 per cent do it again."

No person would go, I probably wouldn't raise $52 million because I got backlash … I'd 100 per cent do it again.

Last month, Barber revealed she had been in discussions with the RFS on how the money could possibly be redistributed.

"Hopefully, [some of the money] can go elsewhere and if it can't, worst-case scenario is it stays with the RFS," she said on Wednesday.

The RFS will seek advice from the NSW Supreme Court and its submission will be ready "over the coming weeks", a spokeswoman said.

Last month, the RFS reiterated its gratitude for Barber's fundraising efforts, despite some critics saying that while Barber had noble intentions, she should have done more homework, or that her efforts were somewhat misguided.

Barber said a lot of the negative press about the fundraiser had been a "media beat-up".

"It has been overwhelmingly positive," she said. "There have been random stories about me calling in lawyers and I was like, I don't know what that's about."

She said she had "nothing" to say to the "handful" of people who criticised her efforts.

"Some of my family lost their homes, I started a fundraiser and it's been really great," she said.

Barber shot to global fame after parodying some of the world's biggest fashion brands, eventually attracting the attention of designer and Council of Fashion Designers of America chair Tom Ford.

As a naturally curvy woman, Barber said she loved fashion but often felt excluded by the industry. Comedy was one of her ways of asserting her place within it, she said.

"I don't think I am, at all, a fashion icon," she said. "I love fashion, I always have, even though a lot of people know me for taking the piss out of it … I've always felt excluded from fashion … when I was younger, you look in magazines and you don't see yourself there.

"I'm more into fashion now because clothes are made that I can wear. It never used to happen, and there's still a long way to go."

On Thursday, Barber will headline the sell-out Harper's Bazaar show at VAMFF, where she will wear Australian designers including Rebecca Vallance.

"I love the idea [at VAMFF] that people like me can be walking on the runway," she said. "It's not just an elitist vibe and it's just fun – I say as I sit in Spanx and get 100 people to check that my dress isn't popping open."

She said in her ideal world, all fashion samples would be made in a size 14, to suit the average Australian woman.

"Fashion needs to open its arms and let every type of person escape in it and express themselves in it, and not just a handful," she said.

And the thing she loves most about fashion? "Now that I'm kinda fancy, I get a lot of stuff for free. I love that, I didn't pay for any of this, not even the Spanx I'm wearing underneath [my dress]."

Barber will also speak at the Australian Fashion Summit on Friday.