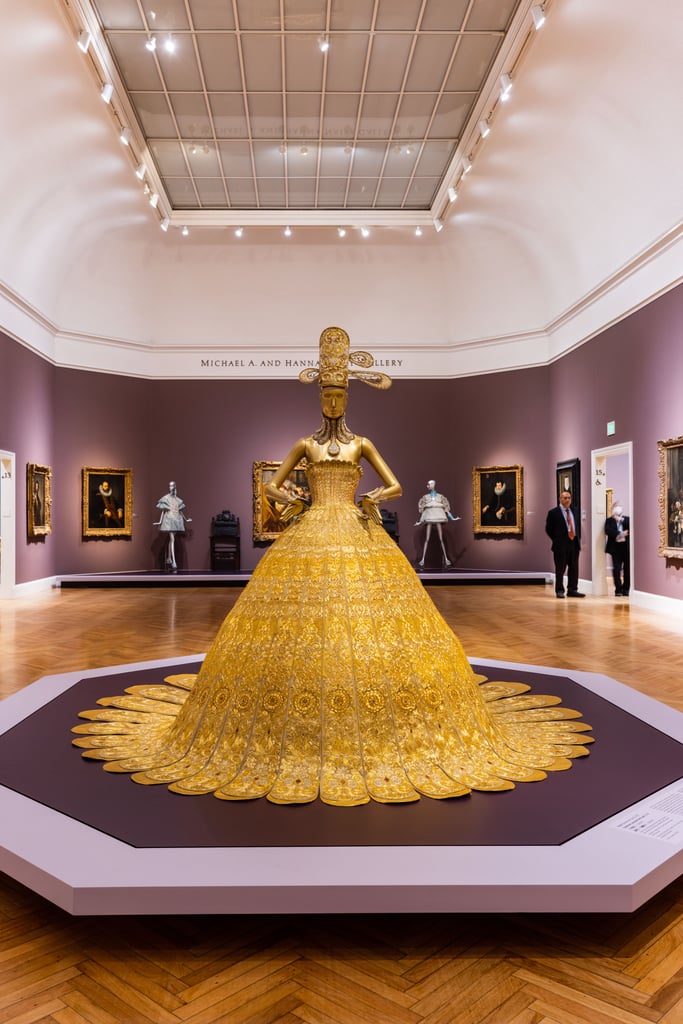 “Clothing happens to be architecture of the body,” Guo Pei’s quote reads on a wall of the Legion of Honor in San Francisco, where 80 of her dresses are on display until November. The “Guo Pei: Couture Fantasy” exhibition unfolds like poetry; just a quick walkthrough will grip viewers with her level of artistry. To describe Pei simply as a fashion designer falls short of capturing the grandeur and technical prowess of her work. Borrowing freely from a multiplicity of sources — be it China’s imperial past or the natural world or European architecture — Pei creates exquisitely crafted garments that intersect with fashion, performance art, and sculpture. And some of her pieces — like the Da Jin dress on view at the exhibit — take tens of thousands of hours to execute.

“I’m very lucky that I’m destined to make clothing,” she tells POPSUGAR. Pei’s journey to becoming the second Chinese designer invited as a guest member of the Chambre Syndicale de la Haute Couture (the French authority for couture) has been remarkable. Born in Beijing, she developed an early passion for embroidered clothing through her maternal grandmother, who told stories about her upbringing during China’s final imperial era. She spoke of richly embroidered Chinese court dresses, which contrasted with what Pei was seeing back then, as embroidered clothing was forbidden during the Cultural Revolution. “At the time, there was no color in garments, everything was plain,” Pei says. Her fascination with beautiful clothes deepened when she began sewing with her mother, whose glaucoma made it impossible for her to continue making clothes for the family.

Pei later enrolled in China’s first-ever fashion program and spent a decade working at name-brand companies. Still, she longed to create embroidered clothing, so she eventually set out to revive the art on her own. As it was no longer taught to girls by the 1930s, she traveled to different villages to source artisans, eventually launching her own practice, Rose Studio, in 1997. Today, it employs 450 craftspeople, 300 of whom are embroiderers.

Many know her as the creator of Rihanna’s gold embroidered gown at the 2015 Met Gala, but Pei was an acclaimed designer long before that moment. The couture designer has successfully parlayed a love of fantasy, architecture, and spirituality into an illustrious career, marked by her technical innovation and global perspective.

Pei’s well of inspiration still hasn’t run out. The legendary designer speaks to POPSUGAR about her childhood, the evolution of fashion in China, and her hopes for the future of the industry. Read ahead for the full interview, lightly edited for clarity.