Home » Beauty and Fashion » And just like that, a tote bag enters the Sex and the City universe

If you’ve been following the filming of the new Sex and the City reboot, And Just Like That, you will have noticed that a handful of Carrie Bradshaw’s signature sartorial choices are making cameos. The Fendi baguette bag, the blue velvet corsage, the black studded belt. And, last Thursday, Sarah Jessica Parker gave fans on Instagram a hint that the iconic tulle – and white ankle boots – she favoured so heavily in the original series would be making a comeback.

One thing has changed though – a bag. More specifically, a plain old canvas carry bag from NPR – the very worthy, intellectually hip National Public Radio service, where, it is rumoured, Carrie may have her own podcast. 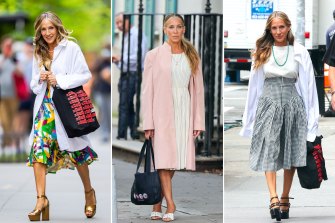 Sarah Jessica Parker as Carrie Bradshaw on the set of And Just Like That. Credit:Getty

It’s also been rumoured that Mr Big loses his fortune, which might explain the dip into a work freebie. But with a younger, more diverse writing team on board for the new series, it might be that Carrie, ever the fashion pioneer, has woken up to what even Princess Catherine has made a habit of – tucking the more ostentatious sections of one’s wardrobe away in favour of plain old high street threads.

“By choosing a canvas tote you show that you care,” says Daiane Scaraboto, Associate Professor of Marketing at the Royal Melbourne Institute of Technology, adding the inclusion of one is most definitely a statement on conscious consumption.

“The responsibility to solve the world’s wicked problems – the climate crisis, for example, has been increasingly pushed on to consumers,” she says. “Individuals then feel they should make ‘right choices’ when it comes to consumption, and a canvas tote is one of the most widely spread symbols of eco-friendliness.

“Many luxury brands and consumers are now developing a discourse that luxury is sustainable because it has quality; it lasts, and it can be resold. I think we will see a mix of both in the post-lockdown world: canvas tote bags and designer bags. What is interesting is that these can happily co-exist and their choices be justified with the same rationale.”

“By choosing a canvas tote you show that you care.”

If the tote that Sarah Jessica Parker has held on to in no less than three different scenes, isn't her own bag and is instead a bona fide prop it will be the perfect anti-fashion symbol for these times. The tote is traditionally a grocery bag, and the shops are, quite literally, the only place to be right now.

But the bag’s real status lies in the organisation behind whatever the tote is advertising – be it NPR, or the illustrious New Yorker magazine, which has its own canary yellow bag for subscribers. There’s also cult favourite, the London Review of Books tote, which, thanks to a particular Instagram influencer in South Korea, became an instant classic, selling out even on Ebay.

As New York magazine, (who have their own tote) enthused, “Totes communicate in a more nuanced language”. They’re a sign that you’re a tad more discerning and smarter than your average Gucci belt-wearing, Chanel bag -slinging pleb.

Totes might be seen as an extension of book bragging, a trend that took off on Instagram, where (mostly) young women would display the novels of Joan Didion and Sally Rooney next to a vase of short-stemmed chrysanthemums – a perfect vignette of performative intellectual style. That is, until it became common.

The notion of “discreet wealth” is a desire for the uncommon; a contrast to how the elite used to spend their money. No longer content to blow cash on status symbols like sports cars and Louis Vuitton bags, which have now become far too ubiquitous, the rich are, according to business analysts, “investing significantly more in education, retirement, and health – all of which are immaterial, yet cost many times more than any handbag a middle-income consumer might buy.”

The super-rich, snooty college girls of Foxtel’s White Lotus, took this discreet wealth performance to a new level, sitting by the hotel pool, showing off their education with their books, The Interpretation of Dreams, by Sigmund Freud and The Wretched of the Earth, by Frantz Fanon propped up in front of them. When a fellow guest asks if they’re really reading their cerebral tomes, their caustic response, “We have a book stylist pick out our books” speaks to their own self-awareness around the trend. But their sarcastic reply was an admission, too, that books, (and other symbols of intellectual curiosity) are, for a certain socially-aware, hip class of clever creatives, the new handbags.

And, we couldn’t help but wonder, if there’s anything really discreet about that.

Make the most of your health, relationships, fitness and nutrition with our Live Well newsletter. Get it in your inbox every Monday.

Most Viewed in Lifestyle